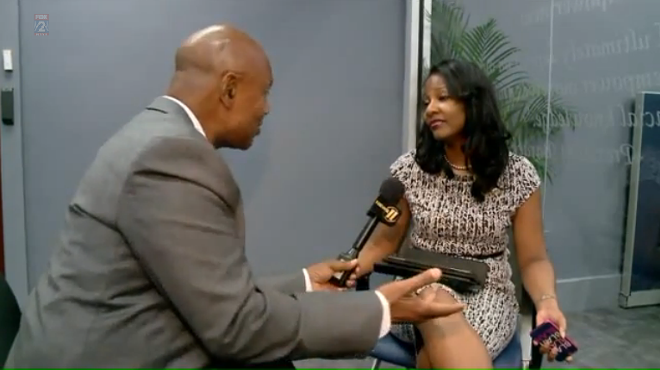 As far as interviews go, the sit-down between St. Louis Treasurer Tishaura O.  Jones and Fox-2's Elliott Davis could have gone worse. For instance, Jones could have spent entire interview lobbing insults at Beyonce or performing a spirited yodeling remix of the Meow Mix jingle.

Instead, Jones, who took office in 2013, appeared to be trapped in a tortuous verbal loop while trying to answer questions about her city-provided car. In all, Jones repeated versions of the phrase "I have the use of a vehicle issued by the parking division, and I pay taxes on personal use for that vehicle" six times, and that's the material that Fox-2 chose to air during Davis' February 24 "You Paid for It" segment.

It was awkward and cringe-worthy and, honestly, kind of a wonderful treat for fans of local political shenanigans. The clip finds veteran newsman Davis at his unflappable best, and it's an interview that really must be seen to appreciate.


Now, more than a week after the spot aired, Jones is firing back at various media organizations for their coverage. In a blog post published Sunday, she slammed the broadcast of Davis' interview as "heavily edited and redacted," and she called a critical editorial in the St. Louis Post-Dispatch "poorly written."

In the hope of clearing the air about the perks she receives as an elected official, Jones organized her rebuttal into a series of "facts," followed by "opinions."

Jones notes that shortly after taking office, she recognized that several of her employees were using take-home cars, even though their job descriptions didn’t require them. So she reduced the number of take-home vehicles in her department from eight to two. Presently, only Jones and the parking administrator, who is required to be on-call to handle parking issues, enjoy the use of a take-home vehicle.

Jones maintains that her use of a $19,000 GMC Terrain SUV does't break any rules and certainly isn't wasting tax-payer money. And it's not like she's simply using the car for late-night McDonalds runs.

"As Treasurer, I am responsible for over 7,700 metered spaces, 6 garages, 2 surface lots, and over 30 elementary schools who have kindergartners in the College Kids Children’s Savings Account program. My responsibilities often have me attending meetings early in the morning or in the evening after work," she writes.

Jones also rejects the argument that using her own car would save the city money.  She points out that her 7,000 miles in annual work travel would up cost the city $4,000 to reimburse. By using the take-home car, the city is only on the hook for her gas bill, about $1,000 per year.

Aside from her professional and legal right to the take-home vehicle, Jones writes that she's a single mother who drives her kid to school each day.

"It would be virtually impossible to trade a car daily. Not only is it a huge inconvenience, it’s also extremely dangerous to be in a garage, alone early in the morning or late at night."

Jones isn't the only official facing somewhat awkward questions about their job perks. So far, Collector of Revenue Gregory F.X. Daly and Comptroller Darlene Green have turned in their take-home cars. In June, the Post-Dispatch basically shamed Recorder of Deeds Sharon Carpenter into withdrawing her request for a new vehicle.

"I am not misusing city funds and I am well within the law to have a vehicle to conduct business on behalf of the Treasurer’s Office," she writes. "The only reason this is an issue is because the media is trying to make a mountain out of a molehill."