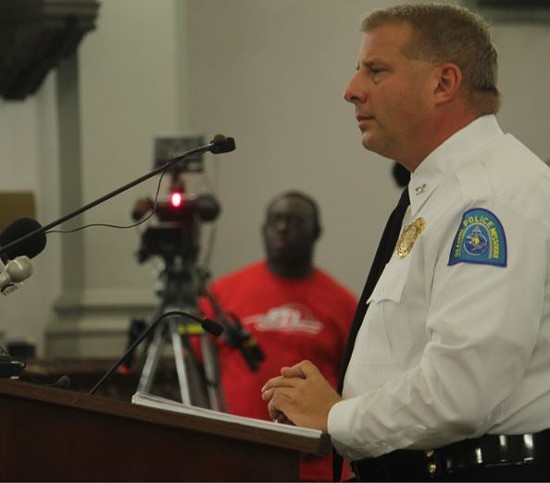 On Sunday, February 28, a simple traffic stop in south St. Louis sparked a social media explosion. Complete with hashtags like #BlackBabiesMatter, the Facebook statuses and tweets accused two St. Louis cops of training their guns on a helpless black family on the way to church. The officers were said to have shouted at a 2-year-old boy while terrorizing the family. On Monday, one day later, protesters chanting “Black babies matter!” blocked the street outside the St. Louis police headquarters.

But for St. Louis police chief Sam Dotson, there was no doubt. There was a video of the traffic stop.

“The video shows that the officers were courteous, professional throughout the entire encounter,” Dotson proclaimed at a press conference Wednesday. “At no point did they draw their weapons or conduct themselves in anything that I would describe other than a professional manner.”

But while the eight-minute video was vindication for Dotson, even with two camera angles recording the whole thing, it shows frustratingly little. A front-facing dashcam captures two officers stopping a light-colored sedan around 5 pm, but the angle is pointed away from the sedan and barely keeps the action in frame. An officer can be seen resting his left hand on his belt as he approaches the car, speaks to the driver and takes some notes. His partner appears only briefly in the second angle, which is taken from camera pointed at the patrol car’s backseat.

After three minutes or so, the officer returns to his partner. The in-car audio recorder preserves a brief conversation. “It’s like a family,” one officer says. “They're saying they’re just going to church. I'm going to see the driver has a valid license.”

The driver, a 19-year-old college student, did have a problem with his license. So, following an officer’s request, the driver switches spots with a passenger. Then the officers let them go. No tickets or citations are written.

Here’s a side-by-side version of the video that features both camera angles, edited together by the St. Louis Post-Dispatch:


At his press conference, Dotson railed against the rumors that erupted on Twitter and Facebook. In fact, citing his investigators, Dotson said the people in the car had claimed the accusations didn't start with them – they, too, blamed social media for circulating lies about what happened.

The social media posts, he said, had “painted a false narrative about officers with guns drawn, pointing at infants, pointed at toddlers, engaging in a confrontational car stop, when this could not be further from the truth.”

Yet doubts about the incident have continued to twist through social media. Although the individuals in the car during the traffic stop have made no public statements, other family members have charged that the footage was altered or shortened to protect the officers. They accuse Dotson of using flawed video evidence to delegitimize victims of police abuse.

Dotson remains unfazed, even defiant. A string of tweets announcing the press conference and video release from the SLMPD’s official Twitter account quickly took a defensive turn, declaring, "The public expects transparency from us. We, in turn, expect transparency from the public.” The department's final tweet on the matter struck a similarly awkward note: "The police department & the community must work together to make #STL a safer place to live, work and visit!"

Melissa Bennett wasn’t in the car that was pulled over on February 28. In interviews, she describes herself as a family spokeswoman, an aunt to the young children who, she insists, were traumatized by the officers.

Several hours after the traffic stop, around 11:16 p.m., Bennett published the first known description of the incident on Facebook.

“Tonight, the police pulled guns while my 2 year old nephew and 5 month old neice where [sic] in the car,” she wrote. “The police yelled at him, told him to get back, and told him not to move. The guns were pulled out the entire time.”
The allegations spread quickly on Twitter, and the narrative was bolstered by statements from other self-identified family members. Supporters and activists zeroed in on the treatment of two-year-old Ethan. They claim the armed officers shouted “sit down” after the child began to wail.

In an interview, Bennett says the police video proves nothing. She’s also angry at the Post-Dispatch for a headline saying that “Video refutes claims that St. Louis police held children at gunpoint."

“The video doesn't refute anything because it doesn't show anything,” she says. “The question that comes to my mind is, is this how we handle business in the city of St. Louis? Dotson gets on TV and now all of a sudden there are no charges, the officers did a good job? This is the fault of social media? No, this is the fault of what happened. If the encounter had not happened, there would not be social media around it.”

But just two hours after that Wednesday meeting with Internal Affairs, the family watched Dotson on TV describing the traffic stop as “conversational and very professional." Bennett was incensed.

“We had practically been living in one house altogether for several days, and we didn’t even know what was going on, and then Dotson got on TV,” she recalls. “To say that people would fabricate that the policemen had guns in the presence of young children is ridiculous. The hell my family has been through, this was not something we would have ever done deliberately.”

Dotson stated in his press conference that even the family blames social media for spreading false allegations. Bennett disputes that.

It's impossible to know what the people in the car actually feel at this point. The family itself is not speaking publicly. Their attorney, Denise Lieberman, declined to comment as well.

(Dotson confirms that family members met with Internal Affairs on Wednesday, but says they have not filed a formal complaint. Questions about the family’s statements to investigators, he adds, should be directed to family members themselves.)

Dotson tells the RFT he felt compelled to move quickly on the allegations. Officers pulling their guns on children during a traffic stop would be an “egregious act,” he says, and he felt obligated to investigate them as if a formal complaint had been filed.

“Everybody thought they knew something,” he says. “Social media said something happened Sunday evening; we found the event that social media was talking about. I talked to the officers. They described it as routine, nothing unusual about it. In our canvass of the area, we found an independent witness not related to the police department or the family that says this was a routine stop, there was nothing unusual about it.”

But while Dotson considers the allegations debunked, he still wishes that he had better video evidence.

“I would have liked this police car to be turned about three feet to the right, so you get a fuller picture,” he says. “The limitations of the technology didn’t allow that to happen in this case. But what I do know is that social media said the officers approached the car with their guns drawn. You can clearly see that the officers did not approach the car with their guns drawn.”

Dotson is clearly winning the public relations battle over this incident, but his victory does nothing to aid in the larger war for the hearts and minds of the city's black community. Bennett says derisively that Dotson's speed and enthusiasm — with just three days between traffic incident and press conference — haven't been nearly so evident when it comes to repairing the longstanding problems in the St. Louis police department. This is the subtext of post-Ferguson America, and it’s the same tension that’s boiled beneath the St. Louis region since Michael Brown’s death in 2014.

That was clear one day after Dotson’s press conference, during a Board of Aldermen committee hearing on public safety in which Dotson was presenting a status update on the department's 90-day bodycam pilot program.

At the meeting’s conclusion, Alderman Chris Carter invited the chief to return at a later date to discuss how the department treats and promotes black police officers.

But that wasn't all. Carter pressed further.

Dotson bristled. He asked Carter to provide an example or to cite data to prove his point.

“We police every neighbored equally,” Dotson said. “I think it’s unfair that you make an allegation that we police a neighborhood differently than any other without facts.”