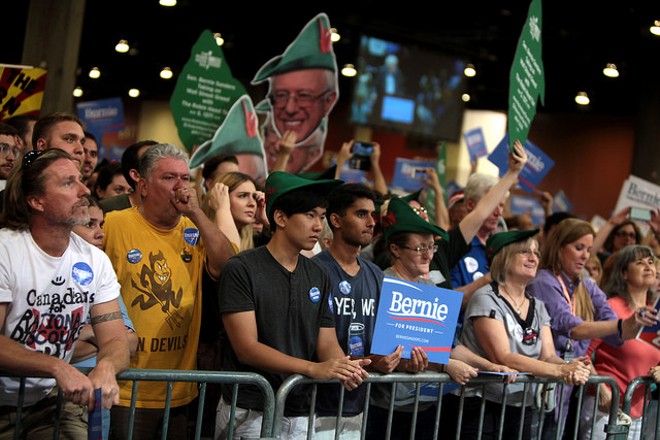 If you're a Democrat and you want to cheer on your candidate tonight as returns come in from no less than twelve states, you've got three intriguing options.

Hillary Clinton's newly opened campaign office at 301 South Ewing is hosting a watch party beginning at 5:45 p.m. (because, let's face it, she's pretty sure she's going to have a good night, so why not start early?)

For those undecided or just open-minded, a meeting of the St. Louis Young Democrats, will be held at Pat Connolly Tavern (6400 Oakland Avenue, Dogtown). Alderman Scott Ogilvie will speak on the earnings tax, while the evening is overall being pitched as a "Bernie v. Hillary Standoff." Per the Facebook event page, "Ready for Hillary? Feelin the Bern? Not sure yet? JOIN US!" Things kick off at 7 p.m.

And for true believers, closer to the heart of Sanders country, the Demo (4191 Manchester, the Grove) is hosting a watch party beginning at 6 p.m. The invite on this one promises "drink specials plus a half-priced beer for every state Bernie wins!" Considering the lineup of states Democrats are voting in today (Alabama, Arkansas, Colorado, Georgia, Massachusetts, Minnesota, Oklahoma, Tennessee, Texas, Vermont and Virginia), that's an offer you can take to the bank. After all, even if everything goes horribly awry for the Senator, he's definitely taking Vermont.

Where are the Republicans gathering? Undoubtedly drinking themselves into a stupor, as it increasingly looks like Donald Trump is going to win the GOP nomination. Hard to blame anyone considering that prospect for bellying up for one bourbon, one scotch, one beer. Poor things.