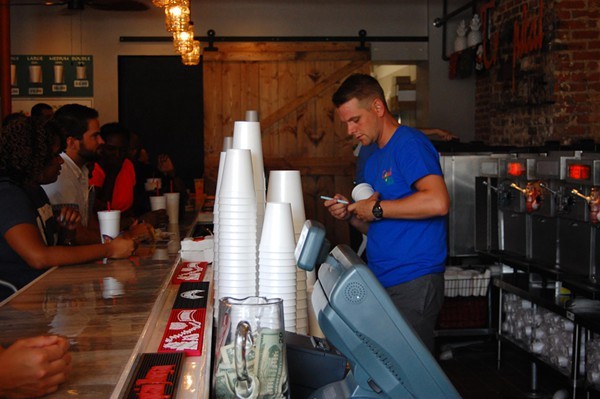 The owners of a Soulard slushie bar claim neighbors are gunning for their liquor license because they’re freaked out by black patrons.

Tropical Liqueurs is facing a potentially fatal blow as the city considers withdrawing the bar’s right to sell booze. Neighbors say Trops became a nightmare of trash, drugs and guns shortly after opening in August, but owners claim they’ve worked through all the problems, leaving just one possible source of the continued complaints.

“I believe it’s because we do have a largely diverse crowd,” co-owner Connie Vaughan said during a hearing on Friday at City Hall.

Her lawyer, Patrick McCarthy, pressed her to clarify.

“We have a large African-American crowd,” Vaughan said.

The St. Louis outpost of the bar popular with binge-drinking college kids in Columbia and Springfield opened in August in the former home of Gladstone's, at South 10th and Soulard streets. The location, while just a block from a string of bars and restaurants on South 9th, is a little off the beaten path and surrounded by family homes.

Vaughan, who lives near Springfield, operates Trops with her two brothers. She admits they were “surprised” by the large crowds they drew but says they’ve worked through early growing pains involving illegally parked cars, noisy customers and garbage.

Neighbors say the place is a disaster, and it’s not about race. Matt Bowers, who lives next door, recounted two harrowing incidents tied to the bar.

See Also: Soulard's Tropical Liqueurs Might Have the Most Bizarre Dress Code in St. Louis

In September, he says, a man pulled a u-turn on 12th Street, hopped out and steadied a gun on the roof of the car as if preparing for a firefight before he spotted Bowers and drove off. Spooked, Bowers sought out an off-duty cop working security for Trops, who he says, confirmed the guy had been tossed out of the bar after an altercation and had been circling the neighborhood.

“We agreed he was probably hunting his target,” Bowers testified at Friday’s liquor control hearing.

In November, he was watching his young son on a Monday afternoon when he looked out the third-floor window of his home.

“I saw a guy reach into his glove box, pull out a gun, put a couple of rounds in the clip, put the clip back in, put the gun in his pants and went into Trops,” Bowers said.

He kept his son on the floor playing games for the next 20 minutes, hoping to avoid any errant bullets, he said.

Neighbors want the city to pull the bar’s liquor license. They collected 30 signatures from property owners and occupants within 350 feet of Trops, easily surpassing the neighborhood majority they needed to force a hearing in front of the city’s Excise Division, which handles liquor licensing.

Hearings run a little like a loosely controlled court trial, with both sides calling, questioning and cross-examining witnesses. The hearing officer, Tom Yarbrough, guided the proceedings for nearly four hours on Friday as one of the neighbors, Billy Tomber, sparred with McCarthy, objecting to statements and submitting fourteen exhibits that included photos, crime stats and a letter of support from a neighborhood association.

Vaughan and McCarthy say the bar has done everything possible to fix problems, even hiring two off-duty cops to augment their security, but they can’t seem to please neighbors. Trops held a community meeting in late October, and Vaughan said the tone of complaints turned ugly, with someone using the n-word at one point. She also accused Tomber of telling owners the bar was getting too “dark.”

Tomber, furious, called the allegation a “bold-faced lie.” One of Trops’ allies, who had been there for the conversation, backed up Tomber, saying he never heard Tomber say anything like that.

Neighbors claim the bar’s out-of-town owners are using race to dodge their responsibilities. When McCarthy, while questioning one of his witnesses, mentioned the “racism seen” during interactions, neighbors in the audience began to shout.

“Did you just call us racists?” one man yelled.

Two police sergeants testified they’d seen a spike in calls since the bar opened. Sgt. David Bonenberger described stopping patrons who peed in the alley or illegally parked their cars.

“I’m going to tell you this, whether you call them clients, patrons, people, persons, consumers, buyers, taxpayers whatever, they’re all people and this is not about race,” said Bonenberger, who successfully sued the city for reverse discrimination in 2012. “This is about a behavior that is being exhibited by the people that patronize this establishment.”

Yarbrough, the hearing officer, promised to deliver a decision on Trops’ license within the next two weeks.

McCarthy says neighbors had been unable to provide hard evidence to show the bar is doing anything wrong. Their testimony adds up to little more than feelings and anecdotes, devoid of facts, he said.

Asked afterward about Bowers, whose testimony did include dates and times, McCarthy dismissed him.

“If he was afraid there was going to be some kind of incident,” McCarthy said, “what kind of neighbor doesn’t call your neighbor and say, ‘Hey, there’s a guy walking in your place with a gun?”