The party could be over for a Soulard bar.

Tropical Liqueurs’ fed-up neighbors are hoping to convince the city at a hearing today to yank the year-old gin mill's liquor license.

Beloved by Mizzou students for its boozy slushies, Trops opened its first St. Louis outpost last spring.  But neighbors claim it can’t control its patrons, who routinely take the party outside during warmer months, blocking streets, raising hell and dropping empty Styrofoam cups in their wake. 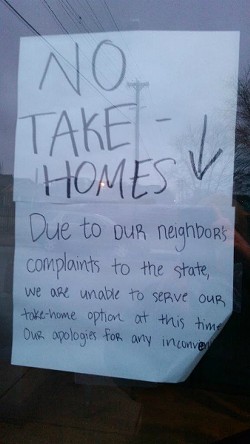 “It’s like they’re running a concession stand,” says Billy Tomber, 43, who lives across the street.

The Riverfront Times has reached out to the bar's owners for comment.

The Soulard spot is the latest for Trops, which is a staple in Columbia and also has an outpost in Springfield.

Neighbors, including Tomber, had once welcomed the bar, signing in support of its liquor license application, he said. But the relationship soon soured and some of those same neighbors have now signed a petition to boot the hard-partying business.

Tomber, who has lived in the neighborhood for 15 years, says locals are used to bars and a rowdier crowd, but claims that Trops customers treat the surrounding block like a tailgate party, taking drinks back to double-parked cars so they can smoke weed, booze and hang out. The results are chaos, police calls and trash, he says.

The owners have made some changes, such as sealing to-go drinks and later doing away with them. That's helped a little, but didn’t solve the problems, according to neighbors. (A strict dress code instituted late last year also did little to mollify the bar's critics.)

Tomber thinks the owners didn’t know how to manage a bar when they opened last summer and still haven’t learned.

“It was kind of like they opened the doors to a party and didn’t realize there were others' concerns to take care of,” he says.

Friday’s proceedings will take place in front of a hearing officer for the Excise Division — the part of the Department of Public Safety that handles liquor licenses. The challenge from the bar's critics rests on the neighbors' ability to produce signatures from a majority of owners and tenants surrounding the bar. If they get that, they’ll be allowed to testify. The hearing officer would then be expected to deliver a decision in a week or so.

Barring a majority of signatures opposed to the bar, the challenge goes away, a city spokeswoman says.

Tomber says he holds no ill will toward the owners, but the situation forced neighbors to act.

“It’s sad to me to have to do this,” he says. “I take no joy in this. I think they’re decent folks who picked a bad spot.”