Social House II Lawyer Fires Back at U. City, With Burlesque Performances Exhibit A 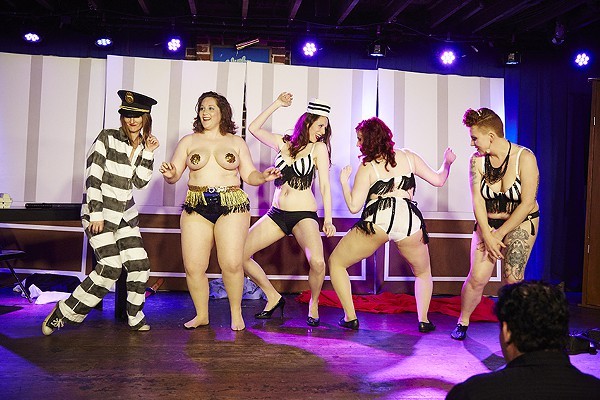 On Monday, the City Council in University City condemned plans to bring Social House II to the Delmar Loop, passing a resolution making clear their opposition to the bar, which plans to feature servers wearing only body paint.

Among those speaking in opposition to the project was Joe Edwards, the unofficial "mayor" of the Loop and owner of numerous establishments, including Blueberry Hill.

But now Albert Watkins, the attorney for restaurateur John Racanelli, is firing back at the city with a 16-page letter — and calling out Edwards in particular, for one key reason.

Blueberry Hill has been hosting burlesque in its Duck Room venue. And those performances, Watkins writes, are far more salacious than the body paint that would be on display at Social House.

The letter makes the point in graphic detail, contrasting photos from RFT's coverage of the burlesque performances with images of smiling servers at Social House's original location in Soulard.

[UPDATE: See the Kiss & Tells burlesque troupe's letter in response to the controversy.]

Fliers reproduced in the letter show other burlesque shows at Blueberry Hill, as well as at another Loop business not owned by Edwards, Cicero's.

Appropriately, these artistic productions were limited to those of the age of 21 or older. ... Again, this burlesque was advertised and conducted very recently in the Loop at a restaurant owned by the city’s “unofficial mayor” Joe Edwards, which makes his February 22, 2016 comments at the U-City Council meeting in opposition to SHII appear, to many, to be at best disingenuous and, at worst, an effort to quash competition in the Loop.


The letter also takes issue with the Loop's "family-friendly" designation, noting, in addition to body piercings and other sundry offerings available on the street, the statue of Chuck Berry.

The singer, who up until recently was a frequent performer at the Duck Room, was once convicted of violating the Mann Act for transporting a minor across state lines for "immoral purposes," Watkins writes. 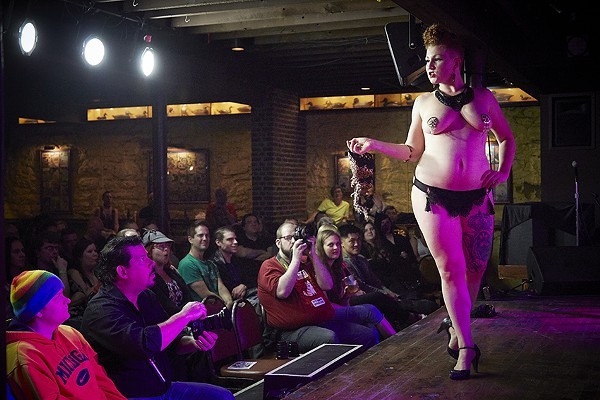 The attorney writes, "To be blunt and accurate, U-City’s Loop is edgy, daring, creative, out-there, and traditionally not influenced by what some may characterize as false bravado enshrouded in disingenuous piety. This is what makes the loop a 'destination.'"

See also: The Kiss & Tells at the Duck Room (Slideshow)

In the letter, Watkins continues to make the case that the new venture does not need any additional approvals from the city. Racanelli previously owned another business at the same location, Market Pub House, but it closed last month. The new concept will have the same ownership as the Market Pub House, Watkins insists, and will not need any additional municipal approvals to open its doors.

The letter clarifies the ownership structure, noting that the Trupiano family, which owns the Social House in Soulard, is licensing its name for this outpost and won't be involved in management.

As made abundantly clear, SHII seeks to be a high end gathering place for men and women to socialize, watch sports of all nature involving both genders, dine on high quality menu items and be served by ladies and gentlemen whose uniforms will include body painted upper torsos. It is important to note, the servers’ nipples and corresponding areolae will be covered by pasties before being again covered by body paint (“Server Uniforms”). It is also important to note that not all servers will don the body painted uniforms, but rather, will be clad in more traditional, less artistic attire.


Racanelli's landlord, Dan Wald, has publicly stated his opposition to the project, and confirmed to RFT late last week that he is considering a lawsuit against his own tenant.

But Watkins argues that Racanelli is only planning to open Social House II because the landlord vetoed his other plans. After Racanelli's business ran into trouble, Watkins writes that the restaurateur "identified and presented to Mr. Wald a national concern prepared to pay off the balance of Ramo’s lease and enter into a long term lease for the space at rates above market. This proposal was rebuffed, despite the replacement tenant candidate sending a representative to St. Louis to further the proposition."

Loop leaders (and Edwards in particular) have been outspoken about wanting to see quirky local businesses instead of national chains on the street. But in light of how nasty the fight over this quirky local business is getting already, we have to imagine they're wishing it was Applebee's aiming to set up shop.

Turn the page to read the unabridged letter, complete with photo exhibits.

For the Kiss & Tells burlesque troupe's response to being included in Watkins letter, please see our February 26 update.

Open Letter to Mayor of U-City