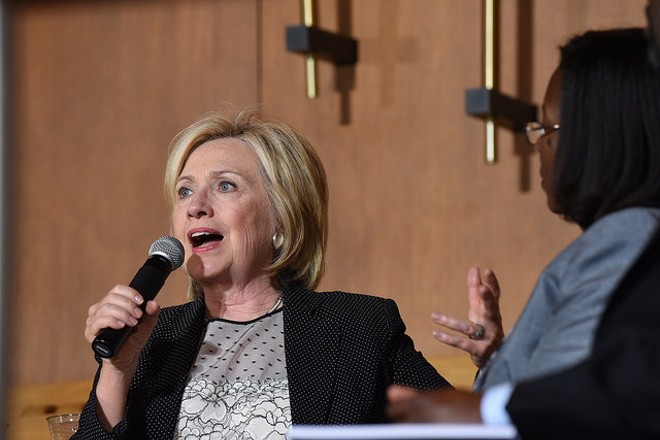 Watch out, Bernie — Hillary Clinton is opening an office in St. Louis too.

Just one week after the Sanders campaign began moving into a storefront on Cherokee, his Democratic Party rival, Hillary Clinton, is setting up shop at a building in Midtown, with a kickoff for volunteers tonight featuring no less than U.S. Senator Claire McCaskill. They've also just opened a campaign office in Kansas City, says Missouri spokesman Drew Pusateri.

The St. Louis office is within the headquarters of the Laborers Local 42 at 301 S. Ewing, near the campus of Harris-Stowe University. And in some ways, it's as emblematic of Clinton as Sanders' new office is of him.

While the Vermont senator is attracting a tidal wave of youth interest thanks to his idealistic platform, Clinton, the former Secretary of State, is relying on her appeal to more traditional Democratic Party constituencies, including labor. And while Clinton's office may not have the curb appeal of a storefront on Cherokee Street, it has good positioning near both I-64 and I-44. Can you say "practical"?

But don't think for a second that Clinton faces an enthusiasm gap in Missouri. Pusateri says the Clinton volunteers on the ground in Missouri are numerous, and fired up.

"I've worked on a handful of campaigns, and usually the campaigns are begging people to make phone calls and knock on doors," he says. "But when the first staffers were hired here, there were already local supporters who'd been doing things for months. That's not the situation I'm used to walking into."

Clinton isn't taking anything for granted, Pusateri adds. "This is a state where folks know her and know what her record is," he says. "But we're going to be working as hard as we can up until the primary. Missouri's a place we're going to fight for."

The primary will take place on March 15. No word yet on whether any Republicans have set up shop locally yet; we'll let you know if we hear anything.