An Open Letter to Dan Neman, Slayer of Pet-Friendly Policies 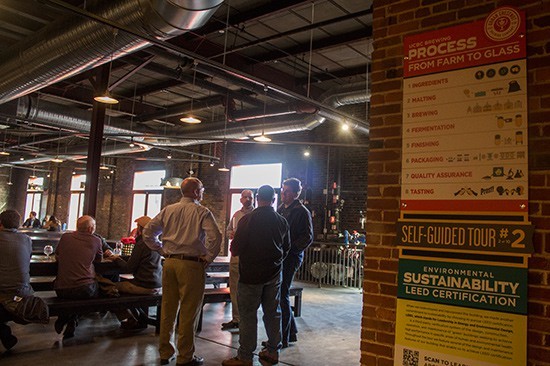 Last month, Post-Dispatch columnist Dan Neman inveighed against the dog-friendly policies at Urban Chestnut Brewing Company, noting that he'd seen a dog do “what doggies do” (and no, he didn't mean doo; the pup merely peed on the floor). Then he proceeded to leave no fewer than 12 messages for the health department. Dogs, apparently, are illegal – what was to be done?

Urban Chestnut has since announced that it's changing its policies to ban canine companions indoors. “We must abide by the law,” co-owner David Wolfe wrote in a Facebook post. “Personally, as a dog owner, it’s been a lot of fun watching fellow dog-lovers accompanying their ‘best friends’ over beers & food at Urban Chestnut, and I’m disappointed that we have to make this change. However, it is always our intention and practice to abide by the law, and thus I hope those of you who have brought your dog(s) by in the past will understand this decision.”

The incident inspired St. Louis resident Eric Bunge to send this letter to the Post-Dispatch. When they declined to print it, we offered up our space.

Despite your heroic efforts, the public is not yet safe. It has been brought to my attention that these same people whom you have so valiantly protected, by eliminating their option to dine publicly with dogs at their feet, are apparently still in danger. It seems that, in their very homes, many of these people are still allowing their pets into the kitchen and dining areas.

Also, it was discovered that the shoes of restaurant patrons are not being sterilized prior to entry at ANY of the area restaurants, thereby undermining all of the work you have done thus far. More must be done to counter these threats. Can you find it in your heart to write more articles and contact more authorities, preferably even more powerful agencies this time, so that we might further ensure public safety once and for all?

That said, I would like to commend you on the courage you demonstrated last month in response to the episode at Urban Chestnut. Bravo! It would never have occurred to me to pull a gun, yet that is precisely what you did, and with such creativity!

Obviously it wasn’t your gun that was pulled—it would be utterly ludicrous to imagine a civilian using the threat of violence to coerce people into submitting to power and abandoning personal liberties. Such behavior would be patently criminal and immoral. However, by sanctioning the government to do it instead, you bypassed this quandary, thereby making what was otherwise a criminal and immoral action completely lawful and moral. Pure genius.

The fact that most of the public can’t appreciate the brilliance of your strategy is disappointing. Personally, I am disgusted by the gall of your critics, these fools, who have already demonstrated their incompetence in managing something as simple as their own health and safety, yet have the audacity to criticize a legitimate ambassador of public welfare. They rush to place blame squarely on your shoulders, painting you as a sniveling, pathetic reporter, who in his desperation to achieve some measure of journalistic notoriety chose to throw an entire business, its employees, its customers, and all the years of associated charity under the bus for personal benefit.

But they are forgetting the aforementioned moral loophole: it wasn’t you who personally issued the threat; it was the government that pointed the gun, which, by definition, confirms that this outcome was right and just. Additionally, if it weren’t for this task of dictating to the public what it can and can’t do, all those government employees holding the guns wouldn’t know what to do with all the tax dollars coerced from the public each year. Without the kind of civic responsibility you have displayed, without this sort of leadership and direction, all of this money would simply be wasted!

And personally, I just don’t see what the big deal is. Sure, if we follow the sequence of events to its logical conclusion, we see that if Urban Chestnut elected to disregard the “no dogs” law and continue providing its customers with precisely what they demanded – a dining room that allowed them to bring their dogs – the result would be the revocation of its business license, which if ignored or resisted would result in the arrival of armed men authorized to use violence to enforce the ruling. I don’t see anything wrong here. This voluntary, victimless business transaction between the owner and restaurant patrons needed to be put to an end. The bottom line is that our government is benevolent and it is here to help, just as you so admirably were last month.

In summary, I would simply like to thank you again for all that you do. Maybe, God willing, if voters continue to elect leaders who continually push for bigger and more intrusive government, together we can realize a future in which all citizens are protected, a future in which all people, under threat of government force, are prevented from contributing to the economy and enjoying the freedoms upon which this country was founded. Just imagine all of that safety and security.

P.S. Have you considered running for office? Just a thought.

Eric Bunge is a reformed liberal, dedicated to truth, objectivity, and the repair of sinking ships.