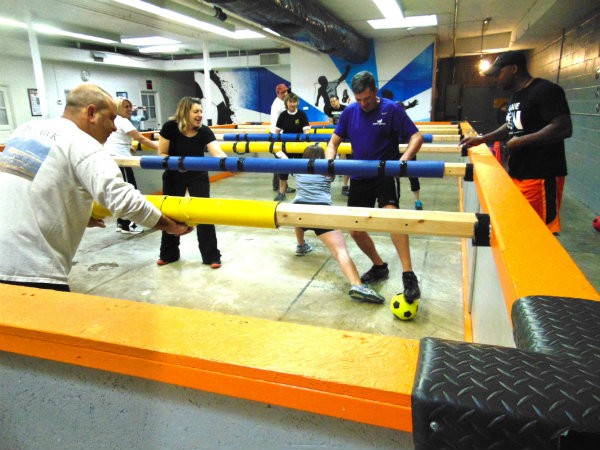 It’s a game you've probably played before—only in a way you’ve never imagined it could be played. Participants move side-to-side, hands tightly gripping the handles fixed on wooden rods. Only using their feet, they lunge for the ball, struggle with rival players and shoot for the opposing goal. It’s human foosball—and it’s happening here in St. Louis.

It’s also the most fun you’ve had in a long time, at least according to Sherri Brown, owner of Great American Human Foosball. Brown's business is located in what used to be the Future Antiques, on Morgan Ford Road in Tower Grove South. She opened here in January 2015, and today she can barely tout the concept over the shouting, hollering and cheering echoing through the building. The source? A birthday party. The birthday boy’s name: Dave, celebrating his 50th.

The court is a hand-made, large rectangle made with plywood, two-by-fours, and wooden rods fashioned with blue-and-yellow sleeves with plastic handles attached, allowing players to move laterally with their teammates. The participants enter where the goal has been pushed away, ducking their heads under the orange, wooden planks.

As they get into position, Clayton Delaney—Brown’s partner, who serves as the facilitator and referee—explains the rules for this life-sized table game. Contact between players is prohibited, and can result in a yellow or red card, a regulation that prompts some foreboding "oooohs" from the guys lining up, as if one of them had been called to the principal’s office. Players must also keep their hands in the handles at all times, or they may have to forfeit a goal. One stark different between human foosball and the table version of the game may be obvious: players are not flipping around the wooden bar.

As Delaney throws balls into the court, he says, “We just want to make something fun for the neighborhood." And in its first year, the business is definitely succeeding.

“When we originally opened we were just going to be a fitness center, and [human foosball] was just going to be one activity that was offered,” Brown says. “Last January, folks sort of got wind of it and it sort of blew up into people wanting to rent it.”

Now, the court is rented out on weekends —- and typically booked up four to six weeks in advance. Weekdays are occupied with corporate team building and school field trips. Every Thursday is their league night, which Brown said is made up of eight teams, compiled mostly of local businesses. From 6 to 9 p.m., the foosball court is packed, with each game lasting 35 minutes.

A big draw to the facility, and human foosball itself, is how inclusive the game is for all people, Brown says. Since players don’t have to run up and down the court, you don't have to be fit, or young.

“We have the best soccer players that come in and play and they have as much fun as the person who’s never played a sport in their life," she says. "Grandma will actually play with the grandkid, and it’s awesome. We always say eight to 80 is our base. Our oldest player was 78 and a half, and she’s been back twice.”

Prior to opening the business, Delaney was working as a personal trainer, something he still does on the side. Brown, however, was stuck in a very different line of work.

“I used to work in national sales and I traveled a lot and I was tired of being gone,” she says. More than that, she longed for meaning, a way to help the community.

She saved up for a year, knowing she wanted to do something else, but unsure of what that might be. That's when her father, Ed Brown, presented her with the idea of human foosball, something he had seen on the Internet.

“My father is sort of semi-retired and is always creatively building things and engineering things, so he was trying to get me to do something on my own and we didn’t know what so he sort of proposed this idea and he drew out a sketch,” Brown says.

The following weekend, her father constructed a court. After they tried it out, the decision about her future was made—within the next two to three weeks, she quit her job. Just three months later, they opened up Great American Human Foosball.

“We were either really stupid or really brave,” Brown laughs. “You think about doing things, but to actually do something is a whole other world.”

Now, a year after they’ve opened, the business has expanded. The pair has added other “big” games— including checkers, chess, connect-four and a game called “foot pool,” which prompts players to use their feet instead of pool sticks to knock colored soccer balls into the pockets. The goal in each game is the same: to get people moving in a fun way.

Along with their internal changes, they’re also partnering with organizations to connect more with the community and provide a safe and fun place for kids in the neighborhood to play. One church, Oak Hill Presbyterian, rents the place out every Tuesday to make it free for the neighborhood, Brown says.

“It’s really exciting to see that from all walks of life, everybody’s equal—they walk in, the church covers it, so it’s paid for. It’s not just the kids who have the money who get to come play it’s everybody,” Brown says. “That’s a big draw for us, being able to work with the community.”

Brown and Delaney have big plans in the works for the future—a possibility of a national program, selling courts and equipment. But for now, the entrepreneurs are happy where they're at and happy with what they are doing.