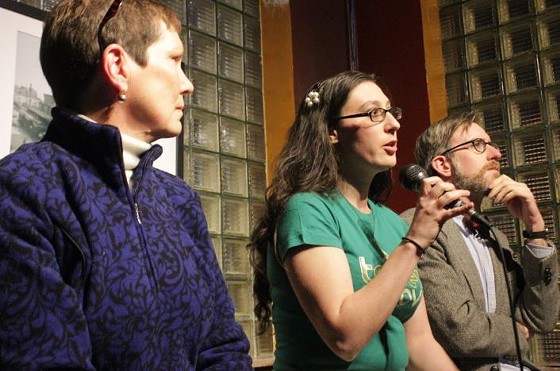 It was Bob Romanik, the so-called "Grim Reaper of St. Louis radio" who actually called Alderwoman Megan Ellyia Green a "skanky bitch," an "alderbitch" and a "skanky-ass bitch" in his radio show on January 11.


But it's the reaction of the president of the Board of Aldermen, Lewis Reed, that now has many St. Louisans fuming.


That's because Reed not only never speaks up against the language, but actually laughs at it. In fact, he joins in on Romanik's piling on against his aldermanic colleague and fellow Democrat (albeit, it must be noted, without any vulgar language of his own).

See also: How an Ex-Con Found His Calling as the Grim Reaper of Radio

In a clip of Romanik's show posted to YouTube, Romanik begins with this short monologue:

Reed, a guest on the show, began his response by using the word "reprehensible." But he isn't talking about Romanik, or condemning the ex-con radio host's tirade against Green.

No, when the council president uses the word "reprehensible," he too is talking about Green.

On the audio, you first hear the sound of Reed laughing a bit nervously. Then, he says, "Megan is ... Megan is. Wow. What Megan did was absolutely reprehensible, right? ... And what she continues to do is detrimental not just to the city of St. Louis, not just to the board of alderman, but to the entire city."

Romanik then accuses Green of "stirring up crap" just to get her name in the paper, adding, "Hey, your name's on the radio, you bitch!"

Again, Reed doesn't correct Romanik or distance himself from the remarks. Instead, he says, "she has a pattern of doing this."

By this, he apparently means going public when she has concerns about the way things are being handled — as she did with her allegation of "corruption" and "bribes" before the board voted to approve funding for a new NFL stadium (plans later flummoxed by Stan Kroenke's decision to take the team to California).

That, apparently, is what passes for reprehensible in this town. Repeatedly calling a female office holder a bitch — "skanky bitch," "alderbitch" and just plain "bitch"? That apparently does not.

You can listen to the clip here.

Later in the clip, Romanik insults Green's appearance and calls her a "skanky-ass bitch." Again, Reed laughs. "You know how you get rid of that bitch? You flush her down the toilet. Because that's what you do with crap," Romanik continues.

Romanik was one of the top donors to Reed's campaign to unseat Mayor Slay, as we reported in 2013.

I strongly condemn the obnoxious comments of Bob Romanik. It is not a laughing matter. #fgs

We reached out to Reed's office to see if they'd be doing the same and received this statement from his chief of staff, Tom Shepard: "President Reed did not and has never made sexist or racist comments. He disagrees with the type of language that was used. It is unfortunate that the Board of Aldermen has been embroiled in destructive controversy ever since the so far unproven allegations of criminal misconduct were made. We look forward to the future hearings at the Board of Aldermen so that we can move forward."

Soon after we published this story, we heard from Board President Reed himself. When we asked directly, he said he "absolutely" condemns Romanik's language. As he noted to us, he himself never used any crass language in the interview.

Reed also provided more context to the radio show. He told us he was there in the studio with Romanik, and so while we can't hear him say anything objecting to the barrage of misogyny, he was making hand gestures repeatedly asking the host to tone it down.

During a commercial break, too, he says he stressed that Romanik needed to cut it out and get back to what he was on the show to discuss — which was how angry he was at Green's unsubstantiated allegations of bribery. "I wanted to turn it back to that," he says. In the complete, unedited show (posted below), Romanik does refer to that request from Reed after they return from a break.

The reason he didn't speak up against Romanik's language, Reed says, was mostly that he was shocked. "It had to get really shocking for me to say 'wow,'" he points out. "What I wanted to do was take it right back to the actual issue."

Reed had originally agreed to go on the show because he was upset about Green tarring some of the aldermen with allegations of bribery — allegations, he notes, that Police Chief Sam Dotson said he attempted to follow up on, but found to be without merit. He grew further upset when, during a radio interview of her own, Green referred to people thanking her for "calling a spade a spade," which he took to be directed to Alderman Samuel Moore, who is black.

(You can listen to Green's interview online here. For the record, she does not mention Moore, or any alderman, by name at any time near her comments about "calling a spade a spade," which come around 10:20 in the interview.)

"When you refer to an African-American as a spade, that's a problem," he said. "These are the kind of actions that continue to divide the city. I wanted to bring it back to that."

For more about Bob Romanik's career, check out Jessica Lussenhop's RFT cover story from 2012. If you're a real masochist, you can also listen to the complete 48-minute episode embedded below.

Here are his statements:

I do not condone the statements made by Bob Romanik. They were completely out of line.

I'm sorry to women everywhere who were insulted, degraded, and belittled by the reckless remarks he made on the air.

Any nervous laughter was due to shock and definitely not in support of sexist & misogynistic tactics that devalue women.

Editor's note: We updated this post after publication to include more context from Lewis Reed. We then updated it again after listening to Green's radio interview. Finally, we updated a third time after seeing Reed's Twitter apology.