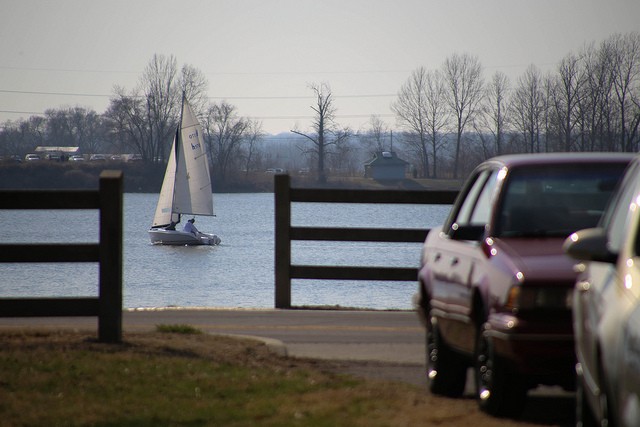 So Stan Kroenke is sniffing around Maryland Heights looking for tax breaks for a big new development — which means he's come a-beggin' to the very same region he publicly insulted as "lagging." Naturally, St. Louis residents are going a little bit nuts. How can we seriously be contemplating this? And how does Kroenke have the balls to ask us for a favor after spitting in our face?

We spoke Friday with Jim Krischke, the new city administrator of Maryland Heights, to get a little more insight into the deal. He explained the process, shed some light on where we're at and even gave us some hints about what could happen next.

Here are five important things to know as we hyperventilate over Kroenke's improbable (and all-too-soon) return.

1. Yes, Kroenke is serious.
For nearly 20 years, Maryland Heights has wanted to see development in an 1,800-acre area between Creve Coeur Lake Park and the Missouri River, Krischke says. Knowing that, Kroenke and his partners apparently began to assemble the acreage. They now own 425 acres and have another 230 under contract. So, yeah, this isn't just a pipe dream.

2. But he's also not a shoo-in.
More than half of the acreage is not under Kroenke's control. He tells Maryland Heights that he's in discussion with the owners of the remaining 1,100 acres, but, suffice it to say, that's a pretty big area he doesn't control, with a set of land owners who sound pretty savvy. (Krischke notes that owners in the area have gone so far as to build a levee to make their acreage more enticing for development.) "This has been in the works many years," Krischke says.

The city is now issuing a request for proposals for the entire 1,800-acre area, and a rival developer could easily show up with options on a large swath of land, pitching an alternate proposal. Or someone could show up who doesn't even control the acreage, but has a plan for it. The city intends to consider all offers.

Part of what they'll be looking at is what kind of tax incentives the developers are seeking. If someone shows up who controls a lot of land and isn't asking for tax breaks, well, that's obviously a huge bonus.

3. Kroenke's status as Public Enemy No. 1 could matter.
City staff will be evaluating the proposals, Krischke says, and they intend to do it with utmost professionalism —- and so even if one of the applicants is a toupeed pariah, that won't enter into play. "We want to see what's in the best interest of Maryland Heights," he says. Factors being considered will include the ownership of various parcels, the best use for the land from a municipal point of view, and the type and volume of tax breaks being requested. Staff will make a recommendation on that, not on who's a likable person or a good civic booster.

After that, though, things could get political — and it's here that Kroenke's nasty NFL proposal could come back to bite him. That's because the city's elected representatives will get to weigh in and choose one of the proposals, and at that point, the staff's professional neutrality could fall by the wayside. "First and foremost we'll come up with what we think is the best plan for our city and its residents," Krischke says. "We'll let the chips fall where they may after that."

4. You can save your death threats — for now
Maryland Heights is feeling the heat. Nasty messages are flooding in from Facebook, Twitter and email. "I understand," Krischke says. "I'm a sports fan like anybody else. If you bash my city, I'm going to be mad."

But at this point, there isn't even anything to vote on — much less a plan from Kroenke formally requesting this or that. Krischke estimates it could be a year before the council votes. So, maybe calm down a little bit for now .... and save your ire not for city staff, but for the people who'll be voting on this thing — when and if it gets to that point.

5. The "best decision" for Maryland Heights might not be the best one for the region
The dirty little secret of this whole situation is that everyone in Maryland Heights is being eminently reasonable — and Jim Krischke is almost certainly being truthful when he says his staff will try to determine the best plan for the city and its residents. The problem is that what's best for Maryland Heights is almost certainly not what's best for the St. Louis region. Even beyond how embarrassing it would be to give anything to a snake like Kroenke at this point, tax breaks in general are bad public policy. Each developer not paying his fair share means more slack for the rest of us to pick up.

If every one of the 92 municipalities in St. Louis refused to give any incentives to developers, the playing field would be level and the tax base bigger. But in a fractured region, someone's bound to break rank —- and then they get the businesses within their borders. Their constituents win even as the region as a whole is a little bit weaker.

That's why, we suspect, Kroenke will ultimately get his tax break. But let's not get ahead of ourselves. On April 29, development proposals are due, and we'll see just how big a break Kroenke's is asking for, as well as whether he's got any competition to develop the land in question. At that point, we might actually have something to be angry about.

See also: There's a Real Problem with St. Louis' Earning Tax — Not Everyone Is Paying It