Big Changes for Gravois May Not Be Big Enough, Trailnet Says 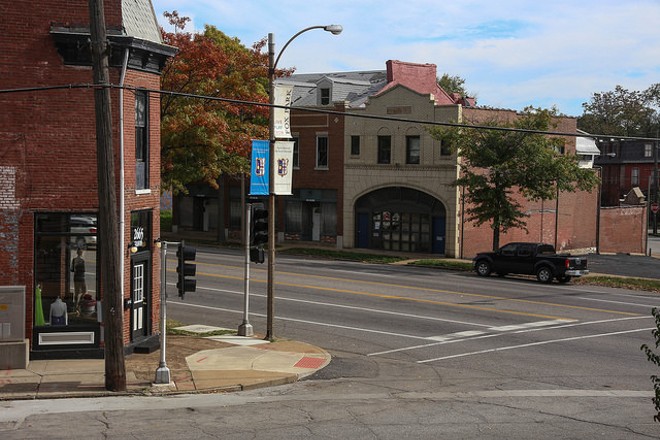 The plan to renovate Gravois Avenue calls for new pavement, safer intersections, a restriped road, and a lane decrease — and it’s that last part that’s brought some controversy.


The lane diet would cut Gravois, which is as wide as six lanes in parts, down significantly. Surprisingly, however, it’s not drivers objecting to slim-down. It’s community organizations who wish it could be trimmed down even further.

Under the plan, the lanes are being decreased only in two sections. One lane diet would cut Gravois from six lanes to five between Jefferson Avenue and I-55. The other would cut it from four to three lanes between Christy Boulevard and Chippewa Street.


Some community organizations believe the plan, announced January 12, is a start, but doesn’t achieve as much as it should. One nonprofit, Trailnet, submitted a report to MoDOT arguing that bikers and pedestrians need more consideration.


To achieve this, they believe Gravois should be reduced to a three-lane road for the project’s full length. Jennifer Allen, the director of strategic initiatives for Trailnet, explains, “If you think of districts in our city that are similar to what people were envisioning that has been successful—South Grand District, The Loop, Central West End. Those streets are much narrower, but what we were hearing from the community is that that type of vibrancy and dynamic where you have people hanging out, eating, drinking, shopping, walking around was more of what they were looking for.”


For MoDOT, the issue is less about making significant long-term changes that will improve business and more about making the road safe and usable for now.


The area engineer assigned to the project, Michelle Voegele, calls the current plans “more maintenance-driven” than comprehensive. With only $9 million, MoDOT doesn’t plan to move any curbs — which would be necessary to create three-lane diets throughout the road’s entire journey through the city. The changes being planned are far more minimal.

But the level of interest being shown in the project is fitting in light of Gravois' importance to south St. Louis. As a diagonal road that intersects the normal street grid, the avenue connects Interstates 55 and 44 with neighborhood streets all the way down to the River Des Peres, where it becomes Gravois Road and exits the city limits. MoDOT research found that the daily traffic patterns on Gravois ranges from around 10,000 cars to over 20,000, depending on the segment. While parts of Gravois are lined with trees, cute Dutchtown storefronts and old churches, others show only vacant, trash-filled lots and strip malls.

Everyone has plans for the street, one way or another. Some would like to see it slow way down and become a booming business district. Others prefer a swift commute through south city.

“It’s not a one-size-fits-all location,” Voegele notes. “There’s trade-offs. When we’re looking at one mode in particular, the impact that it has to another needs to be reviewed. We have to find that balance in incorporating all of the components.”


For Trailnet, the trade-offs MoDOT chose to make prioritize the wrong concerns. Allen says that the planners should be asking, “Are businesses being supported? Are people walking and biking prioritized?"


But Voegele argues that the current plan is based on MoDOT’s understanding of the area and its needs. For example, when the plan was first announced last year, neighbors objected to its side street closures. MoDOT revised the proposal to remove these closures.


“We feel comfortable in the two sections that we are proposing a road diet with this project that we can strike that balance between all of the needs, whether you’re a pedestrian, a cyclist, a vehicular user, a transit-rider,” Voegele says.


Although the public comment period has ended, MoDOT still wants to hear feedback from residents about its plans.


“If the community still has comments, they can certainly contact me,” says Voegele. Her contact info is online if anyone's looking to weigh in.