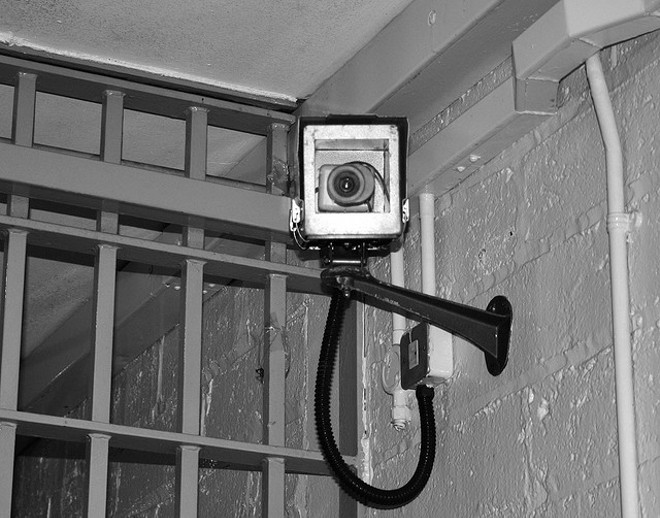 More than a month after Nicholas Gilbert's violent death in police custody, the St. Louis Metropolitan Police Department says it has signed an approximately $130,000 contract to install recording cameras in all holding cells. The department plans to begin installing the cameras in early March.

Arrested in December for supposedly trespassing in a vacant house, Gilbert allegedly used his own sweatpants to fashion a noose and was preparing to hang himself in his holding cell when a group of officers intervened. The 27-year-old, who was reportedly homeless, fought back against the officers, and during the struggle his head hit a concrete bench. Gilbert was pronounced dead that night.

Gilbert's death raised familiar and troubling questions, and not just about how police treat inmates. It also put the spotlight on how police departments use cameras — or, in this case, how they don’t.

Indeed, the official account of Gilbert's death came not from surveillance footage but from the testimony of the officers involved. The cameras pointed at the holding area were built only for monitoring, not recording, which meant the critical footage of Gilbert’s death existed only at the moment that it flashed by on some computer screen. Then it was gone.

Reports of Gilbert’s death were followed by a protest featuring family members as well as Black Lives Matter activists, who saw the treatment of the young white man as part of a broader pattern of unchecked police abuses.

Protest at #STL City jail to demand accountability for the suspicious death of #NicholasGilbert in custody. pic.twitter.com/4gZ4xz1X4k


The officers' accounts also didn't sit with Gilbert’s mother, who claimed that her son had been beaten to death. “They killed our kid,” she told the St. Louis Post-Dispatch.  Yet an assistant medical examiner who performed the autopsy on Gilbert said the injuries were “consistent with a struggle," not a beating.

When asked about the absence of recording cameras in city's three station houses, SLMPD police chief Sam Dotson told the Post-Dispatch that funding for upgrades had actually been part of a bond issue proposal rejected by St. Louis voters in 2015. That explanation likely won't satisfy those whose trust in police has already been shaken, let alone the protesters or Gilbert's mother.

Editor's note: This story was updated after publication to include additional information from the police, including the cost of the cameras.