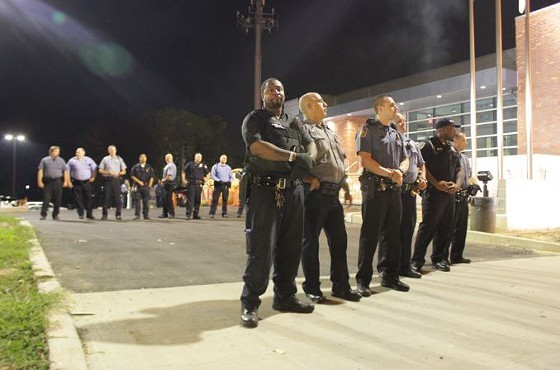 Five protesters swept up by the Ferguson Police Department on the six-month anniversary of Michael Brown's death have filed a federal lawsuit against the department, alleging their arrests were in retaliation for their exercise of their First Amendment rights — and that the police destroyed evidence in an attempt to prosecute them.

They had insisted all along on their innocence. And now, represented by attorney James Wyrsch of Khazaeli Wyrsch Stock and the Arch City Defenders, they're suing the officers who arrested them and the city that backed those officers during those long months awaiting trial.

Three of the plaintiffs — Phillips, De Mian and Lohmann — were videotaping the protests when they were arrested. That is significant because the city of Ferguson was operating under a consent decree barring them from "interfering" with anyone recording or photographing in a public place.

The suit also alleges that no one ever gave an order to disperse. Instead, it alleges, someone came out of the police department and yelled that everyone would be going to jail — and soon enough, they were. De Mian, who uses a wheelchair, was "forcibly eject[ed]" from her chair by officers while she was on private property across the street from the police department.

As early as March 2015, the protesters began asking Ferguson for video of the incident. By September, the city still hadn't produced any — and issued a statement saying they had none.

In late October, after the protesters turned over the footage they'd recorded, Ferguson finally turned over some video — but it was only footage from two officers' body cameras, the suit alleges. And on in one case, the body cam footage "had been edited to begin after [the officer] began making arrests."

Ferguson stated that it had lost or destroyed all of the video footage from all of the stationary cameras outside of the FPD and the Ferguson Fire Department; the body camera footage from Defendants Burnes, Hammond, Mace, and O’Brien; and the footage from the dash cameras of the three FPD vehicles used during the arrests.

The protesters' suit alleges that their own footage shows protestors being slammed to the ground while videotaping the officers, in contradiction to the arrest reports which claim they were resisting arrest. In one instance, an officer forced his knee onto a protestor's neck and smashed his face into the asphalt.

A Justice Department report on Ferguson later noted this about the arrests:

It appears that officers’ escalation of this incident was unnecessary and in response to derogatory comments written in chalk on the FPD parking lot asphalt and on a police vehicle. FPD’s suppression of speech reflects a police culture that relies on the exercise of police power—however unlawful— to stifle unwelcome criticism.


The protesters are asking for "compensatory damages, attorneys’ fees, expenses, costs, and any other relief this Court deems just and appropriate."