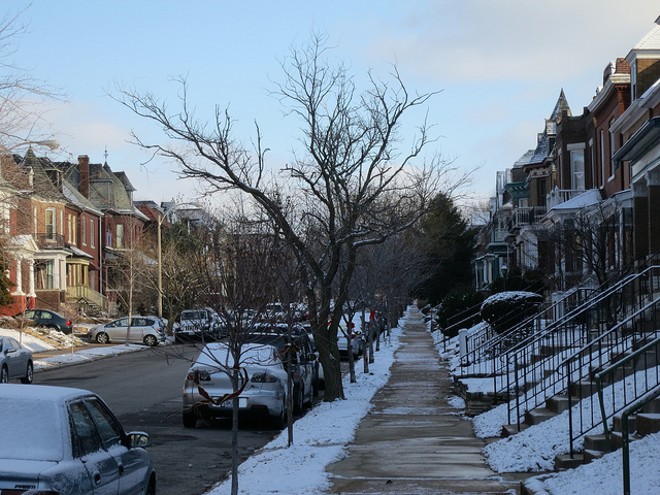 If you meet a naked man in the road, do you help him?

That was the unenviable dilemma facing Timothy Huffman on January 24. Huffman, a Saint Louis University communications professor, says he was driving home along Thurman Avenue in Shaw when he noticed traffic snarling and cars pulling over. Then he saw the man. The naked black man.

"He is tall, maybe 6’4”, though he is cringing in a way that makes it hard to see what his full height is," Huffman later wrote in a lengthy Facebook post describing the encounter. "A few shirts and perhaps a jacket lay in a crumpled heap about 50 feet away. His shoes are still on, and his pants and boxers are around his ankles."

A quick left turn would have taken Huffman home, but instead he pulled over and approached the man asking if he needed help. The naked man responded by muttering something about looking for God and "the man."

By now, other bystanders had called 911, but Huffman was worried. There were so many ways a police intervention could go wrong. In his Facebook post, Huffman cited the deaths of Michael Brown, who was walking in the middle of a street before a fatal confrontation with Ferguson officer Darren Wilson, and Kelly Thomas, a homeless and mentally ill man who died after being beaten by two California cops in 2011. This man is in danger, he thought.

At that moment, Huffman made a decision.

Huffman returned to his car and followed the naked man further down the street. Huffman remembered how he'd once calmed a classmate suffering a breakdown by repeating her words back at her, no matter how incoherent. Maybe that could work here, too, he thought.

Huffman got out of his car and again approached the naked man, who shouted at Huffman, "You are trying to KILL ME!"

“I’m not trying to kill you," Huffman said back.

Huffman's persistence paid off, and suddenly, at a distance of 30 feet, the 33-year-old professor and the naked man were having a conversation of sorts. Huffman offered to pray with him, and that seemed to further calm the man down. When paramedics and police finally arrived, Huffman says he helped coax the man into an ambulance.

"The solution was a mutual accomplishment," Huffman tells Riverfront Times. He credits the paramedics for their levelheadedness and notes that a responding officer chose to back away rather than aggressively contain the naked man's outbursts. KMOX reports that the man was apparently high on synthetic cannabis, which has been known to cause psychosis in some users.

Huffman's post was widely shared on Facebook yesterday, but the professor is shrugging off those who praise his actions.

"I don't think of myself as a hero in this scenario," Huffman says. "I think it's naive to be like, oh yeah what a happy ending. That's bullshit, this story hasn't ended. It's ended for me, but for him it goes on. I think we need to be realistic, we made that transaction go more smoothly, but he’s got a long road ahead. And a lot of places that can still go bad.”

It’s Sunday afternoon and I’m driving on Thurman Ave, on my way home from FedEx making copies. As I drive north, the...