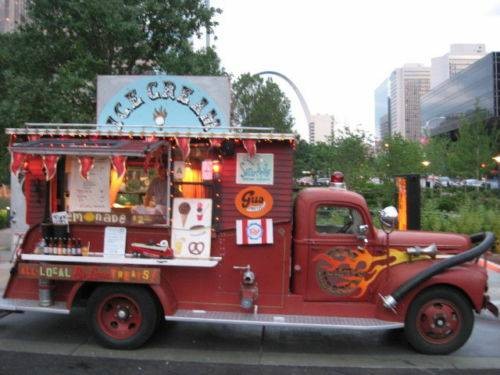 If you've longed for your very own vintage-fire-truck-turned-super-cool-ice-cream-truck, this is your lucky day.

Scott and Stephanie Pondrom, who renovated a circa 1946 fire truck to build the one-of-a-kind Fire & Ice Cream Truck, are offering the vehicle on Craigslist for the low price of $32,000. If you're based in St. Louis, they promise to throw in their business phone number and professional contacts — because this is a truck that comes with its own following.

Indeed, for the past seven years, the couple has done steady business at special events, Stephanie Pondrom says. For the last five, they've also had a contract to provide sweet treats at downtown's CityGarden.

Saying goodbye will be a bittersweet moment.

"It's been great," Pondrom says. "It's supported us through some difficult times financially. But my husband hasn't had a summer vacation for that entire time. He's the only licensed driver, and it's a heavy-duty business. Everybody gets tired at some point."

The truck began as a pipe dream. The Pondroms were not yet married, and working in design for a Chicago theater company, when Scott Pondrom began to fantasize about turning an old fire truck into one that dispensed ice cream. "He kept talking about it and talking about it," Stephanie Pondrom recalls. "I said, 'Either you do something, or don't talk about it any more.' I literally put out an ultimatum."

That night, they got on eBay to see how much an old fire truck would even cost — and, what the heck, put in a bid on one they found while they were at it. When they won, it seemed to be destiny.

Since they'd been planning a move to St. Louis anyway (Scott is a native), they went through the process of licensing and launching it here (at the time, City Hall had no idea what a "food truck" was, Stephanie notes). They originally started vending frozen treats near the Arch. After they were booked for CityGarden's grand opening, the one-off celebration led to an ongoing relationship.

By now, the Pondroms have a daughter, who is six. "She's devastated," Stephanie Pondrom says. "She can't believe we'd want to sell it."