Once Credit-Averse, Sump Coffee Is Now Leading the Way 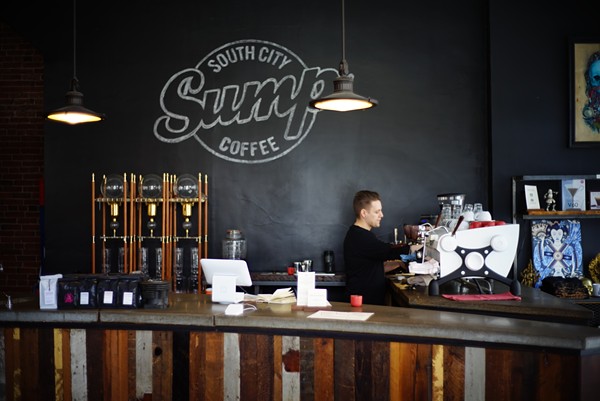 When Sump Coffee opened in December 2011, it was a cash-only establishment. Just a little over four years and many cups of coffee later, the south-city coffee shop is one of the first in the nation using the newest technology that allows customers to pay using only their smart phone — no credit cards necessary.

Square, a tech company founded by St. Louisans Jack Dorsey and Jim McKelvey in 2009, has made it a goal to provide retailers, no matter how or big or small, with the means to accept credit cards. Now, they are providing businesses like Sump with the technology to accept not only cards using chip technology, but also with the means to accept Apple and Android pay—a form of payment usually accepted only at big businesses and national chains.

Customers can either insert their card into the Contactless and Chip Reader, or tap their phone on the small, square device to pay for their coffee. It takes just seconds.

According to Square, Sump was one of the first 100 local businesses across the nation to use the company's new reader, along with Cafe Grumpy in New York City and Philz Coffee in San Francisco. Square sent out the new readers exclusively for these businesses to use in late November. Now, they're available for any business to purchase.

“For us to be able to have something that a multi-state chain doesn’t have yet, this is pretty nice and pretty exciting,” says Scott Carey, owner of Sump Coffee. Carey’s relationship with Square began just four weeks after the coffee shop opened, when he realized he couldn’t keep his doors open without accepting credit cards. He's since become a big fan of the San Francisco-based company, which recently announced plans to open an office in St. Louis that employs 200.

“It allows us to do what I think we do best, which is make the coffee,” said Carey. “They’ve basically always provided a solution, so whatever works in terms of legal tender, Square has a solution for that.”