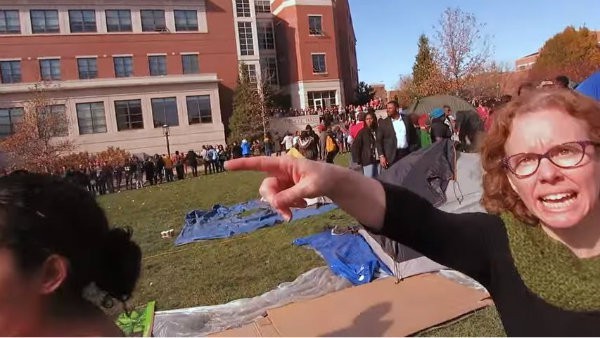 Update: According to a statement released Wednesday by the Missouri University Board of Curators, Melissa Click has been suspended "pending further investigation." The Board's investigation will determine whether Click may face "additional discipline."
End of update. The original story continues below.

There's no shortage of opinions about Melissa Click, the Mizzou professor who was filmed in November trying to physically block reporters from a campus protest. Republican lawmakers want her fired and journalists nationwide have expressed outrage at the footage, which shows Click grabbing at a videographer's camera and shouting “Who wants to help me get this reporter out of here?” and “I need some muscle over here.”

Now prosecutors are weighing in, and it's bad news for the assistant communications professor. According to ABC 17, Click is being charged with assault in the third degree, a Class C misdemeanor punishable by up to 15 days in jail and a $300 fine.

During the November protests at Mizzou, Click had joined in the campus-wide movement that ultimately led to the resignation of university system president Tim Wolfe. But Click's infamous outburst — along with her tenuous connection to Mizzou's lauded journalism school — launched the story into viral stardom that at times overshadowed coverage of the protest movement itself.

One day after the incident, Click released a written apology, stating, "I regret the language and strategies I used, and sincerely apologize to the MU campus community, and journalists at large, for my behavior, and also for the way my actions have shifted attention away from the students' campaign for justice."

That's not to say Click has no allies of her own. In December, more than 100 Mizzou faculty members signed a letter supporting Click and her continued employment at the university. The letter described Click's actions as “at most a regrettable mistake."