And, this story is also about a cat – the now-famous Matt the Cat, who is once again home after being gone for nine weeks.


The story began November 15 when Maire Murphy lost her cat, Matt, when he slipped out the door unnoticed. As soon as she realized he was gone, she posted his photo on the Missouri Lost and Found Paws Facebook page and began a relentless flyer campaign. Eventually, almost every prominent tree trunk, light pole and community bulletin board in the Tower Grove South neighborhood boasted a full-color photo of Matt on a bright yellow background that was ingeniously hard to miss.

The calls of orange cat sightings began to roll in. Murphy followed every lead, driving to the location where a Matt lookalike had just been spotted and visiting homes of a few who captured roaming cats for her to examine. Murphy quickly learned there were a lot of orange, fluffy cats out there that looked very similar. None of them were Matt.

Murphy then posted on the Tower Grove South Facebook and Nextdoor

pages. That’s when things went off the rails. A neighbor (and complete stranger) created a Matt the Cat Facebook page (now managed by Murphy) to focus the effort, and Murphy’s brother-in-law created a Twitter account.

Hundreds of calls, texts and posts on social media of sightings began pouring in. Neighbors and strangers from afar began posting messages of encouragement.

Local businesses also lent their support. Hartford Coffee Company offered their space for strategy meetings. A get-together at a local bar was proposed so that neighbor could meet neighbor outside of social media and build upon the collective effort. Tyler Krings, a bartender at The Night Owl by Tree House created a Matt the Cat cocktail in solidarity, with Old Grand-Dad whiskey, Aperol (a nod to the orange), Big O ginger liquor (a nod to the ginger color) and bitters.

Murphy admits that she did lose hope a few times. But she almost didn’t have a say in the matter. People had fallen in love with Matt the Cat. Stories of joyful pet reunions filled her inbox. She felt buoyed by the community and encouraged to elicit its help with this now very public search. In fact, the search had transformed into a movement and a channel for goodwill almost overnight, uniting strangers in a common mission.

Murphy described it this way on Facebook a couple of weeks ago:

Thank you to all who are supporting the Matt the Cat search. It's not really a story about a lost pet, not anymore. It's about people coming together to help others for no reason other than good will. I have received over 150 texts, calls, photos, and messages online about sightings and captured cats, and even videos. This does not include the hundreds of supportive comments and suggestions on the Tower Grove South Facebook page, where this whole thing began. Neighbors have put out food, shelters, helped me search alleys and post flyers... It's not about a cat. The real story is that people are willing to go out of their way to do something good, when they receive nothing in return. It is a STORY ABOUT A COMPASSIONATE NEIGHBORHOOD. It's cliché, but with all the terrible news stories, we need reminders about the good will human beings have for one another… I hope everyone is very proud of their community — and for those who may be tired of this story, I appreciate your patience and hope that you can see it as a story that is much bigger than a cat, and a story that gives honor to your neighborhood.

Others were encouraged as well. As someone posted on the Matt the Cat Facebook page, "This is probably the most awesome thing I have seen... We've been planning on moving back into the city for some time now... But have had a rough time narrowing our neighborhood search down. Because of Matt the Cat and all the awesome neighbors he has... TGS has moved into the #1 spot..."

Then, last Thursday, January 21, everything changed.

It started with a photo posted on the Shaw neighborhood’s Nextdoor page of a cat that looked a lot like Matt spotted on the other side of Tower Grove Park.

The photo was quickly reposted on the Tower Grove South Nextdoor and Facebook pages. Before Murphy even had a chance to see it, people began commenting, insisting this was Matt. One person remarked that the freckles on his nose were an exact match. Another created a mashup of the photo from the flyer and the one from the sighting to illustrate the uncanny similarity.

A stranger reached out to Murphy to alert her, and finally, Murphy posted she had seen it and was on her way. She added that even if it wasn’t him, she would help to find its owners and show it the kindness she hoped someone would show Matt.

When Murphy arrived, the cat was no longer there, but she decided to put up a few flyers before she left, as she hadn’t put up any on that side of the park yet. She stopped a neighbor to hand him one and he remarked that there was, in fact, a similar cat on his porch right then.

They both rushed over and, after a bit of a scramble, caught the cat and put him in Murphy’s car. Even then, she refused to get her hopes up. She had been through this once before — after scanning a cat’s microchip, she'd learned it wasn’t Matt. This one looked a lot like Matt, but she wasn’t going to celebrate until she could confirm it.

She immediately called Tina Roe from the St. Louis Lost and Found Paws, who had scanned the first cat, and who had already been tipped off by neighborhood resident Jen Bradford via Facebook. Roe agreed to meet Murphy that night.

The next couple of hours can only be described as incredible. All relevant neighborhood pages were buzzing with speculation. One post elicited more than 300 comments alone: “Can someone with a chip scanner go to Maire's place and scan this MaybeMatt?!? The suspense is killing me!!!” More chimed in, exclaiming that they could no longer continue watching their TV shows because they were glued to Facebook. Others poured a glass of wine to calm their nerves and join the waiting game. People began posting photos of their cats “waiting” for news of Matt.

The idea of a neighborhood gathering was again proposed. Someone demanded a Matt the Cat T-shirt. Several seconded the idea and others proposed their sale could raise funds to help other lost pets in the neighborhood.

Finally, almost two hours later, Murphy posted a short message: It was indeed Matt. That post collected almost 1,000 likes and more celebratory pet photos. One person posted that just after Murphy published her message, she heard cheers coming from the house next door.

The next day, Murphy posted a thank you. “70 days and 70 nights but the good people of Tower Grove/Shaw didn't give up!! DON'T GIVE UP ON YOUR LOST PET! He was found a half mile away after weeks of torrential rains (the worst flooding in St. Louis in decades) AND snow storms!”

But that wasn’t the end of it. In the days that followed, a children’s book was suggested, there was a call for January 21st to be declared “Matt the Cat Day,” the hashtags #mattitude and #thanksmatt started appearing and a local band traveling in Florida dedicated a song to Matt. Alderwoman Megan Ellyia-Green even introduced Resolution 187 in celebration of “Matt the Cat."

Earlier this morning, St. Louis Public Radio aired a story by arts and culture reporter Nancy Fowler, who is also a Tower Grove South resident. Fowler had actually interviewed Murphy days before Matt was found after growing intrigued by the overwhelming support she had witnessed on social media.

“I began to realize this was a big deal as the number of comments on social media grew," Fowler says. "People are really pulling together around this. I haven’t seen anything like this in the community with this sort of groundswell of support. It didn’t begin as a big effort, but grew organically. Even without the happy ending, the story already a good outcome.”

Matt was offered a free spa day from Murphy Mutts and Cuts Pet Market and a free pet photo shoot from Michele Verna Photography. The Purple Martin offered $5 Manhattans and Old Fashioneds in his honor the next weekend. Someone wrote a song; the owners of Gustine Market posed with a wine toast to Matt. Tower Grove South resident Adam Woehler mocked up a T-shirt design through Zazzle. 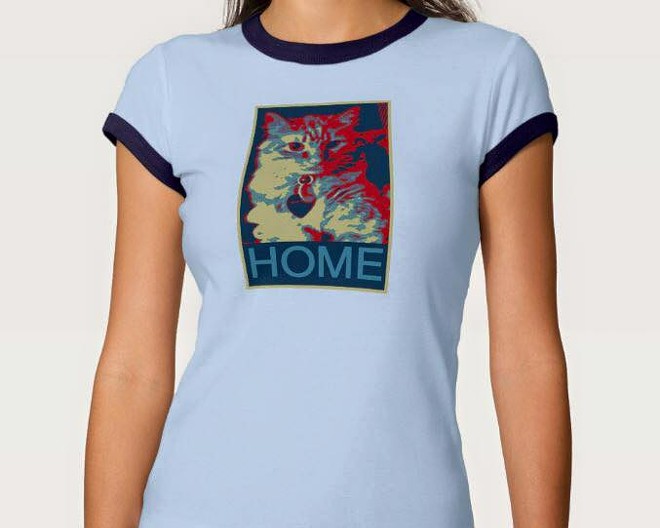 Days later, Roe of St. Louis Lost and Found Paws reflected, “It was totally amazing how Tower Grove came together. I see it a lot in our organization, because that’s our purpose. But to see so many neighbors come together to help one person, one cat – it was astounding.”

For Murphy, it was a learning experience — in the best sense of the phrase.

“When you stop strangers and ask them something they will often talk back. I had never done that before. People are hungry for connection. It’s really heartwarming," she says. "We have a wonderful community. One thing I have learned is that we may not all know one another, but we are not strangers.” 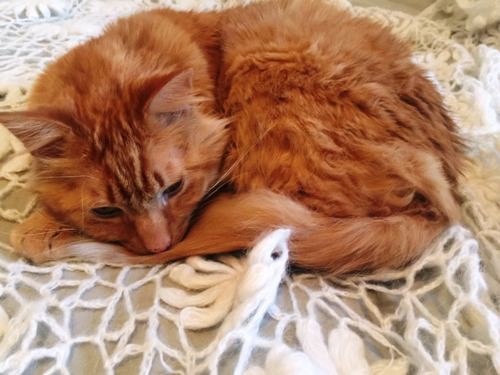