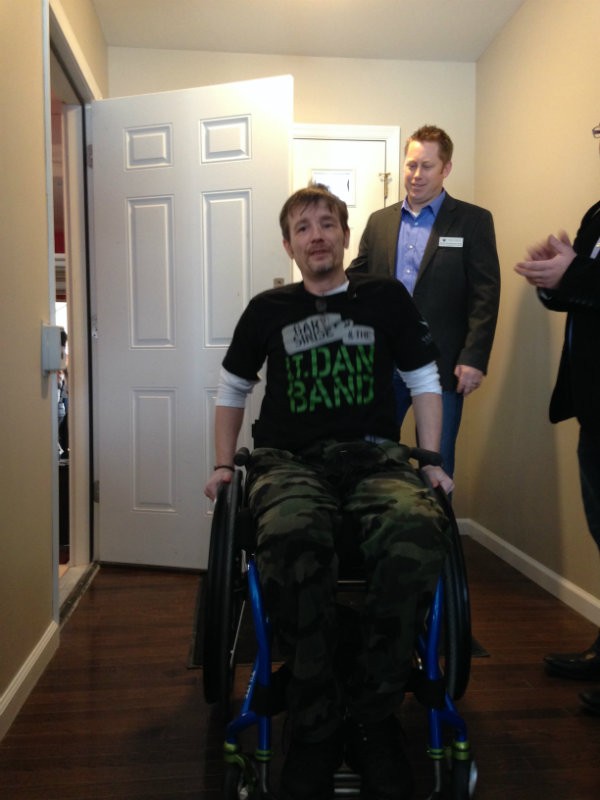 Chris Sanna returned home on Monday — more than three months after a robber shot him through the spine as he left a St. Louis Cardinals game.

The 44-year-old Army vet, who nearly died in the attack, scanned his place in House Springs as he rolled his wheelchair into his driveway. “Normally, I’d be crying right now,” he said, “but I’m all teared out.”

Volunteers completely renovated Sanna’s home while he was recovering in the hospital. Coordinated by the Gary Sinise Foundation, which works to support military veterans, the workers outfitted every corner to suit Sanna’s new life in a wheelchair. Dozens of them showed up on Monday morning to mark the day. 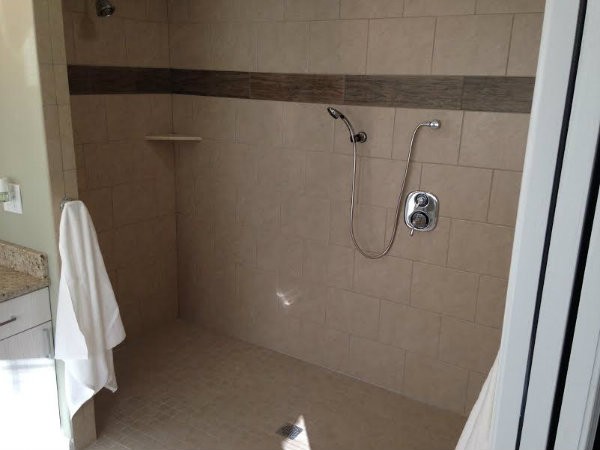 Sanna and his girlfriend had met his family on September 25, 2015 at the Cards game to celebrate his mother’s 60th birthday. They left early to beat traffic only to be confronted by gunman on Walnut Street as they walked to their car. The crook stole Lisa’s purse, and then opened fire as the couple ran.

Sanna was hit in the back. The bullet tore through his spine, liver and lung before it exited through his armpit.

St. Louis Metro police charged 31-year-old Kilwa Jones with assault and robbery following a five-day manhunt. Jones, a career criminal, was already in custody for allegedly beating his ex-girlfriend and holding their children hostage just days after the attack on Sanna. He is still awaiting trial.

Supporters from across the world rallied to help Sanna, raising more than $121,000 so far through a GoFundMe account where his mother, Candis Sanna, has posted dozens of updates about his recovery. She started to cry as she thanked all the workers on Monday.

“I love you all from the bottom of my heart,” Candis Sanna said. “I really do.” 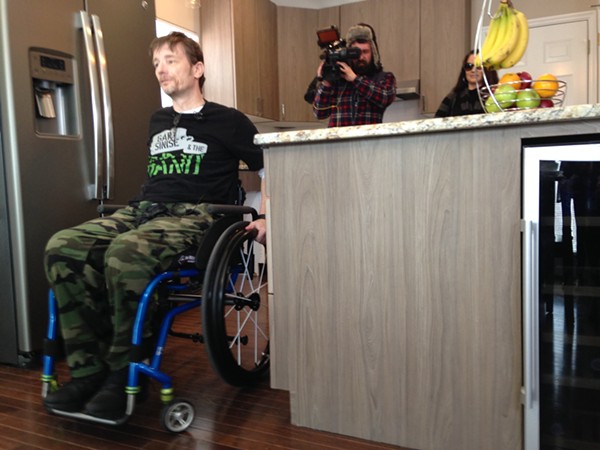 The renovation included everything from moved walls to landscaping. Hardwood floors replace carpet. Electronic chair lifts in the garage and living room sit ready to carry Sanna up and down stairs. His old bathroom is now a sprawling shower that’s easily big enough for a wheelchair.

“We could have a water fight in here,” Sanna joked after seeing for the first time.

He has had dark days since the shooting, he said. Simple tasks — even urinating — are hard, and the trauma takes a toll on his whole family.

“My family members have stuck with me,” Sanna said. “The pain makes you very mean. You fight with your family, and they just stand there and they put up with it. I’m just grateful.”

He eagerly rolled from room to room in his house, lingering over a new washer and dryer set, running his fingers across a microwave installed low in the side of a granite-topped kitchen island. Sinise, who spoke to Sanna by phone on Saturday, sent him a new bass guitar. The actor's signature is written across the body.