The owner of Dojo Pizza is cleaning up after a string of police and FBI raids on his south city building.

Loren Copp re-entered the condemned former church in Bevo Mill on Thursday, almost three months after he was hauled away in handcuffs as part of a murky human trafficking violation. Charges against the martial artist-turned-pizza maker have yet to materialize, but the 47-year-old still must contend with more than three dozen building code violations written during the raid.

“My goal is to come in, get it cleaned up and winterized,” Copp said on Thursday.

He hopes to reopen in the spring.

Copp had lived in the building, at 4601 Morgan Ford Rd., along with four teenage girls in his care until the October 15 raid. Along with selling pizzas, he taught free karate classes and operated an online school. A search warrant revealed he was the target of an investigation in forced labor trafficking and sex abuse. Copp was forced out and the girls sent to live in foster homes.

He denies all the allegations and he has never been charged with any crimes in connection to the raids.

“Looks to me like a good way to ruin somebody’s life,” he says of the case.

He’s now focused on starting over, and there is a lot of work to do.

His building is a wreck. Clothes, papers and ceiling tiles litter the second-floor living space. Spoiled pizza ingredients smell about as good as you’d expect after the power was shut off and they were left to rot for three months in basement refrigerators.

Copp attributes the mess to the law enforcement officers, who swept through the place at least three times in October and November, and a few home-repair projects that were in progress when police pushed through his doors. 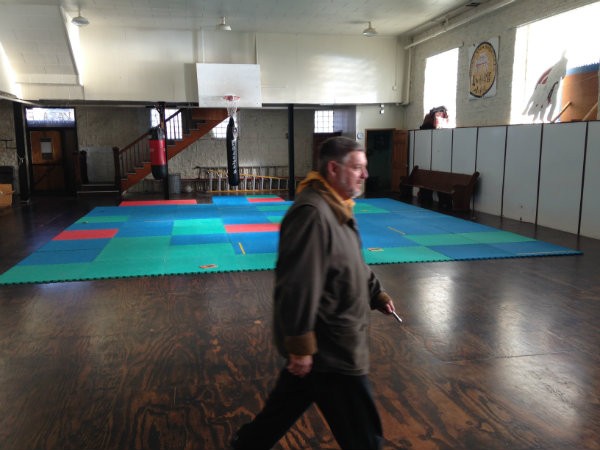 He has permission only to clean while he has an architect look over the structure so they can apply for building permits to make repairs. He also plans to battle the city on an $18,000 tax bill, which he claims he shouldn’t have to pay as a nonprofit.

Friends have volunteered to help with the clean-up and additional work, including electrical and painting. One has even designed “Bring the Dojo Back” T-shirts they’ll sell to help raise an estimated $4,000 for the rehab.