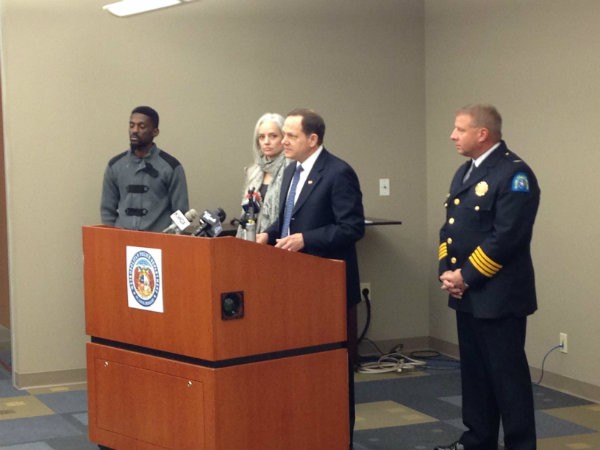 Fresh off of St. Louis’ deadliest year in two decades, Mayor Francis Slay pretty much has to do something about the city’s murder problem.

You can’t watch your metropolis leapfrog a bucket of blood like Detroit for the nation’s worst kill rate and let that slide. And so on Monday, Slay introduced a new Crime Commission that he says will help push a plan hashed out with violence-weary aldermen at the end of 2015.

Commissions and plans are a favorite of politicians faced with hard-to-solve problems and few solutions. Slay, who’s been criticized as caring more about building a new football stadium than death in the streets, is sensitive to the idea he is papering over the bloodshed.

“The Crime Commission is put in place not as a window dressing,” Slay told reporters on Monday. “The vast majority of things in this crime plan we have been doing for quite some time. We’ve gotten results. The results are not good enough, but we’ve gotten some results.”

St. Louis cops investigated 188 murders in 2015, an 18 percent jump from 159 in 2014. The year got off to an even bloodier start, but targeted policing actually slowed crime during the second half of the year, leaving St. Louis with just a 2 percent increase in overall crime compared to 2014, police Chief Sam Dotson said.

He blames the violence on a steady flow of guns, often stolen from car break-ins and burglaries. A total of 657 guns were reported stolen in 2015, a 24 percent jump from the previous year. City cops seized more than 1,500 firearms from suspects, Dotson said.


But even with those guns off the street, the killing continues. Three people were killed during the weekend, including a double homicide on Sunday night in the Carr Square neighborhood. Police found a bullet-riddled vehicle in the 1400 block of O'Fallon Street where it had crashed into a concrete barrier. The driver, 23-year-old Tylan Bogan, was still behind the wheel, shot through the head.  Officers discovered the body of his passenger, 24-year-old Henry Williams Jr., sprawled out in the street.

The city has work to do.

The 15-member commission includes an array of social workers, educators, charitable leaders, academics and activists. They’ll help oversee the city’s new crime plan targeting 15 of the toughest neighborhoods in St. Louis. The P.I.E.R. — Prevention, Intervention, Enforcement and Reentry strategies — Plan is designed to flood the neighborhoods with a package of social services, such as youth employment programs, as well as beefed-up law enforcement. It will also work with inmates on job training and other skills to keep them from dropping back into bad habit when they get out.

Activist Bruce Franks, who was featured in an RFT cover story in September 2015, is on the new commission. He says he has faith the P.I.E.R plan can make real change.

“If this was window dressing or something to appease people, me personally, I wouldn’t be part of it,” Franks said.

He thinks the varied background of commission members will help the city figure out what works and what doesn’t.

“I believe in the P.I.E.R. Plan because it attacks gun violence from the root causes — be it lack of resources, lack of jobs, lack of opportunities,” he said.

Slay fired back at skeptics on Monday, claiming safety and dropping the body count were always his top priorities, even if the melodrama over the Rams possible departure hogs all the headlines.

“We certainly have not dropped the ball if that’s what you’re suggesting,” he said.

Here's a list of the 15 members of the Crime Commission: