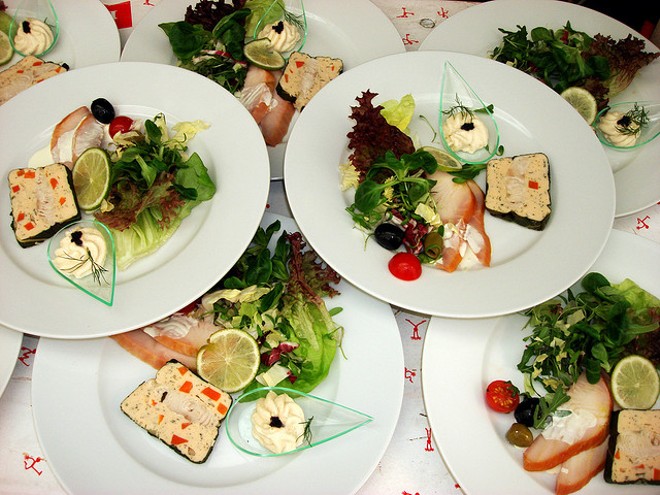 Gregory's Creative Cuisine, a catering company that handles school lunches, weddings and other events across the St. Louis area, subjected its only two black employees to an intensely hostile work environment, a new lawsuit claims.

The suit, filed by cousins Kourtney and Tommy Steed, in St. Louis City Circuit Court yesterday, claims that the n-word was used "frequently and casually" while the two were employees at the company in the fall of 2014. The two employees ultimately left the company over the incidents, the lawsuit claims.

The suit alleges that owner Gregory Mosberger himself circulated a cartoon riffing on the Two Men and a Truck Moving Company — "two n**** and a stolen truck — we move your s*** like it is ours," the cartoon read.

Mosbacher also allegedly showed the Steeds a video with a narration saying, "back to the plantation, n***," the suit claims. "Gregory would repeat this phrase directed at Tommy [Steed]," the suit alleges.

Joe Bauer, an attorney with Bauer and Baebler in Soulard, said that Mosberger is recovering from surgery and unable to comment. However, Bauer noted that the Missouri Human Rights Commission had looked into the claims and declined to take action. "They decided there was not enough merit to do that," he says, though, according to its custom, the commission did give the cousins the right to pursue the matter on their own.

Bauer said that Mosberger denied the allegations to the Human Rights Commission and continues to do so today.

Editor's note: A previous version of this story misspelled Gregory Mosberger's name. We regret the error.