Here's a New Plan for Overgrown St. Louis Lots: Mow to Own 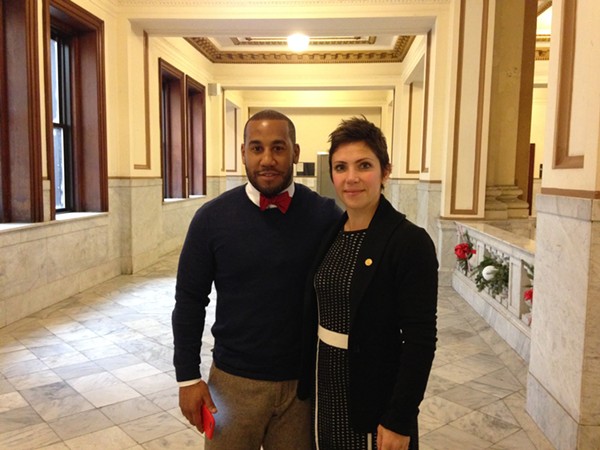 A “mow-to-own” program floated by two St. Louis aldermen would give neighbors an opportunity to trade a little elbow grease for weedy, city-owned lots. Cut the grass enough times on a vacant patch, and it would be yours.

“It’s a dead simple way to take care of some of the biggest issues in these neighborhoods,” Alderwoman Cara Spencer says.

Spencer and Alderman Chris Carter think the program would help the city unload tough-to-sell parcels, save taxpayers money on maintenance and give everyday St. Louisans the first shot at properties that have a huge impact on their neighborhoods. It’s modeled after a newly adopted initiative in Memphis, but the mow-to-own movement is becoming more popular across the country. Columbus, Ohio has one. So does Rockford, Illinois. A similar program was touted a blight buster in New Orleans but struggled under state laws that demanded governments sell their properties for market value.

The way mow-to-own typically works is neighbors agree to take care of empty lots, earning a $25 credit toward the assessed value each time they cut the grass. Most cities require people to mow every two weeks through the season. Once the cold weather hits, they can earn more credits for additional upkeep as needed. Some cities charge a registration fee for the program. Some don’t.

Spencer and Carter say they’re still finalizing the details and plan to introduce the proposal to the rest of the board in the next 30 to 60 days.

The properties would come from Land Reutilization Authority, or LRA, the land bank operated through the St. Louis Development Corporation. The lots, leftovers from government auctions, are little more than a burden on taxpayers, the aldermen say. The city spends about $3 million each year to mow LRA properties, Spencer said, and they’re still often overgrown and dangerous.

There are about 425 empty lots in Ward 20, which is Spencer’s district covering Dutchtown and nearby south-city neighborhoods. Carter has about 100 in the 27th Ward, which includes Baden, North Point and Walnut Park in north city.

“The majority are next to someone who wants to maintain it,” Carter says of the vacants.

Participants would have to qualify — no tax delinquents or code violators — and they would have to own an adjacent property. The city already monitors properties across St. Louis for violations, so it shouldn’t be hard to make sure would-be owners are actually doing the work, Spencer and Carter say.

They see it as a boost to the city and anyone who wants to put in a little work in their neighborhood. But keep in mind they’re only talking about single lots here — don’t expect to take over a half-acre with your John Deere.