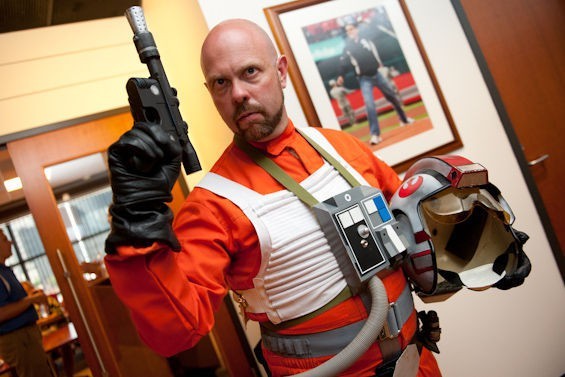 A Washington University professor has crunched the numbers on the collapse of Star Wars' Galactic Empire, and things are not looking good, financially speaking. And although Zachary Feinstein, an assistant professor of electrical and systems engineering, is basing his latest research on a fictional universe where Jedi masters and lightsabers are commonplace, his methodology actually reflects economic calamities much closer to home.

The basic idea behind Feinstein's paper, "It’s a Trap: Emperor Palpatine’s Poison Pill​," is that the three original Star Wars movies feature some pretty big losses on the part of the Galactic Empire, a sprawling collection of 1.5 million inhabited planets and, writes Feinstein, what must be a suitably massive economy.

At the end of the first Star Wars movie (a.k.a. Episode IV), hero Luke Skywalker and a ragtag group of rebels destroy a moon-sized battle station known as the Death Star, and then they do it again at the end of the third film, Return of the Jedi. Coupled with the death of Emperor Palpatine, Feinstein hypothesizes that the victorious rebels would immediately be faced with saving the galaxy's financial system and avoiding recession.

"The emphasis of this work is to calibrate and simulate a model of the banking and financial systems within the galaxy," Feinstein writes — with the hope of determining just how much cash it would take to bail out the galaxy's financial sector.


Obviously, Feinstein is a major Star Wars fan, and he weaves a few jokes and references into the economic modeling and math stuff that we're not even going to begin to tackle here.

However, a few points stand out:

To predict how a such a large economy would react to the "terrorist" attacks against the Death Stars and the dissolution of the government, Feinstein looked at how the U.S. stock market fell after the 9/11 attacks. He derived additional data from looking at how markets briefly plummeted in 2013 after hackers took over the Associated Press' Twitter account and claimed the White House had been attacked.

Determining the actual cost of the Death Stars also proved tricky, so Feinstein had to get creative: he extrapolated from the size and cost (about $17.5 billion) of the U.S.'s newest aircraft carrier, the USS Gerald Ford. Considering the first Death Star measured 140 kilometers in diameter, Feinstein figured the orbiting platform would cost $193 quintillion to build. The second, larger Death star would cost $51.4 sextillion.

So what's the rub on this still-completely-fake economic crisis? Using his fancy math, Feinstein estimates that the rebels will need to offer a bailout package of at least 15 percent of the galactic economy if they want to keep things afloat and save the major banks — which comes out to something in the neighborhood of $913 quintillion.

And if Skywalker and the rebels can't cough up the cash, what then?

"Without such funds at the ready," the paper concludes, "it's likely the Galactic economy would enter an economic depression of astronomical proportions."