Waze Will Change Your Life — and Could Solve Problems for St. Louis, Too 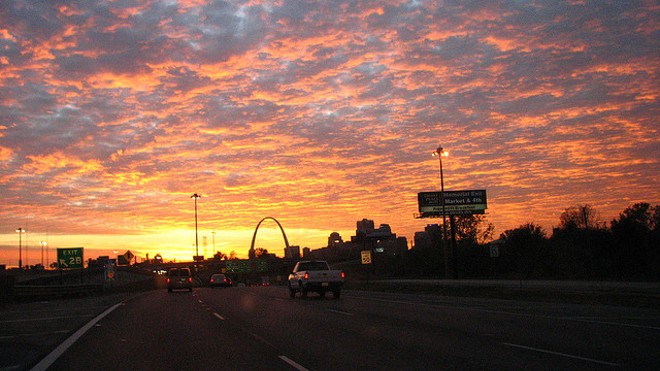 You know that SNL skit about the Californians? Those absurd accents, that obsession with directions ("Stuart! You can't take the 405! It'll be totally JAMMED!")? That was my life for three years when I lived in Los Angeles, and that's where I fell in love with Waze. It couldn't help me with the accents, but the directions? Waze had the directions down.

Waze is a traffic app. It works like a GPS, guiding you from Point A to Point B — only there's a huge twist. Using real-time data, Waze steers you around the traffic. If the 405 is totally jammed (and in L.A., it's always jammed), Waze sends you onto side streets, and not necessarily the ones that even veteran drivers would think of using. You might make a dozen turns, but you end up outsmarting the traffic jam. In L.A., where it was not uncommon to spend an hour driving five miles, it was a lifesaver.

I moved to St. Louis almost exactly one year ago, and I assumed Waze and I were finished. I was living in Lafayette Square and working downtown — traffic? What was traffic?

Then I took a job working in the Loop, which was not only under construction, but maddeningly positioned from my home. Did I take I-64 to Skinker? Or I-64 to Forest Park, through those surface streets in the CWE — and then north to Delmar? Or maybe Forest Park all the way to Big Bend, to avoid the trolley construction shitshow? After a few weeks of wondering, and cursing, I remembered Waze — and once again, my course was set, even if my route did change a little bit every day.

But then I started to notice something. Waze is not as good in St. Louis as it was in L.A.

Oh, sure, it finds me some shortcuts, and on days when eastbound I-64 is backed up even as I'm racing home to relieve the babysitter, I know it's going to find me the shortest route, even if I'm making ten zillion turns down side streets to do it. But it's not quite as perceptive to the subtle changes in daily traffic patterns as it used to be in Los Angeles.

The problem, I realized, is that not enough St. Louisans are using Waze.

More than any other traffic app, Waze is dependent on its users. It figures out which streets to send you on based on how fast other drivers are moving — or, in the case of the 405, not moving. And beyond that, it relies on user-generated info. Report an accident with a click of your smartphone, and Waze reroutes everyone else around it. It's part of the fun of the app: When those drivers confirm that they see what you reported, you get a little thank-you note. "Seven Wazers thanked you for your report," it tells you, and you find yourself sitting up a little straighter. Over time, in fact, you start to get a warm-and-fuzzy feeling alien to most drivers ... the idea that we're all in this together.

As, really, we are. With Waze, even when you're not making formal reports, you're helping out — just by having the app on your phone, Waze knows where you're driving and how fast you're moving. That helps the app know where to route other people. Et voila! Everyone gets to move a little bit faster just because you're out on the road.

But back to St. Louis for a moment.

I saw a bit of how this translated about a month ago, when lightning struck a light pole on I-64 and they shut it down just ahead of my morning commute. No one, apparently, had reported it to Waze, and none of those 60,000 local users were stuck in the resulting jam, and so the app had no idea the scale of the problem. It kept trying to route me onto the highway, even as I cursed at it. ("No, WAZE! Not I-64! Not Forest Park either!") At this point, we St. Louis Wazers just don't have the critical mass to solve these problems.

There's a solution here, and I realize that using this column to urge you towards it might seem like an abuse of my bully pulpit. But that's the thing about Waze. Use it a little bit, and you start to realize that just by being selfish, you are helping others. By getting to your destination as fast as you can, you are generating data that helps others also enjoy a faster commute. What feels like pure selfishness is actually altruism. And isn't that the real American dream?

As it turns out, though, this isn't about you and me. This could also be about St. Louis.

Waze has a new, free program that helps cities, and even entire states. Launched in October 2014, Connected Citizens creates a free data exchange between government entities and Waze. Waze lets cities use its data — a treasure trove of real-world traffic information — even as those cities can use Waze to get the word out about sudden closures or rerouted roadways.

L.A., Boston, even the Iowa Department of Transportation have now signed on. They're using the data to solve problems they didn't even know existed. Boston, for example, realized via data from Waze that double-parked cars had become a huge problem, says Waze's Meghan Kelleher. Using a bike strike team, and Waze data, they authorities issued thousands of "move-along" citations. The problem cleared up in a jiffy.

Now, St. Louis is never going to have the traffic problems of L.A. or Boston. (That's one reason I moved here.) But think of all the little quality-of-life issues that real-time data might help with, from those lights on Lindell that are timed exactly wrong to the way traffic always backs up heading southbound on Jefferson during evening rush hour. If we all joined Waze, and St. Louis city leaders took advantage of the offer to join the Connected Citizen Program, we could actually solve stuff like that. Imagine that!

Oh, and get this. Waze also lets drivers report when they've spotted a police officer. And let's face it: Even though St. Louis doesn't have a major traffic problem, we have had real problems with cops using drivers as a revenue stream. If Waze started giving us real-time warnings, we wouldn't need legislative action to reform these money-grubbing municipalities. We could do it ourselves, one report at a time.

So come on, St. Louis, it's time to download that app. Your city needs you. Your fellow drivers need you. I need you.

And I'll be there for you, too, I swear. The next time there's a hazard blocking Skinker, I'm all about reporting it. No need to thank me, either — it's literally the least I could do.