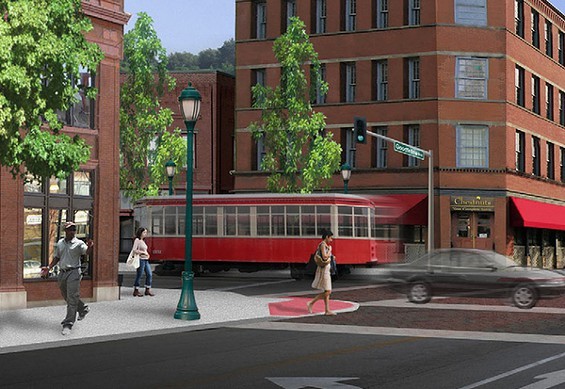 The St. Louis County Council needs to cough up $3 million in tax dollars for the Loop Trolley — or the project stands to lose a bigger federal grant, plunging it into possible financial peril.

That's according to District 5 Councilman Pat Dolan, who is sponsoring the item on tonight's agenda that would earmark money for the project. The item is slated for a final vote tonight.

"They could lose the Federal Transit money if there isn't matching funds," Dolan says. "And we've got a dedicated transportation fund with $20 million sitting in it. I don't want to see the region apply for federal grants and then not be able to sustain them."

The trolley was originally slated to cost $47 million, but costs have risen to $51 million thanks to increased paving and landscaping costs, according to the St. Louis Post-Dispatch. After previously winning a $25 million federal grant, the trolley has secured an additional $5.4 million grant from the feds.

But it needs a local match, Dolan says. He hopes to find it in money from the sales tax increase approved by voters in 2010, which earmarks an additional half-cent sales tax to transit issues. Dolan said this would be the first contribution county taxpayers have made to the project.

The trolley, a 2.2-mile line connecting University City with Forest Park, has been under construction since March. The Loop was plagued with traffic problems and parking woes until a few weeks ago, when major work on Delmar came to an end. However, a final piece of construction, involving the already jam-packed Skinker Boulevard, will take place next summer.