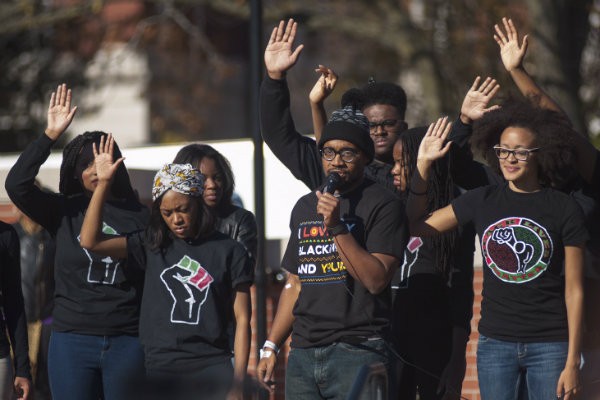 By the time MU Police announced they had found the teenager who threatened to shoot every black person he saw, on November 11, the credibility of the individual threat itself had little bearing on the fear it had created.

It had been posted on the anonymous app Yik Yak the day before, where another message also appeared: “Some of you are alright. Don’t go to campus tomorrow.” That, it later became known, was a reference to the recent community college shooting in Oregon. Screenshots of the posts then spilled, with reaction, onto Twitter. Social media accounts also reported a sighting of the KKK, and a girl on Twitter narrated an encounter in Speaker’s Circle with what she called a “racist cult.” Reality became tough to discern. Student Body President Payton Head advised on Facebook to “Stay away from windows in residence halls,” as “The KKK has been confirmed to be sighted on campus.” Head apologized later, saying the information came from “multiple incorrect sources.”

Today, things at the University of Missouri, where I attend grad school, have relaxed. News crews have gone home. The grass on Carnahan Quad, where student protesters camped out for the resignation of UM System President Tim Wolfe, then celebrated when it actually happened, doesn’t look quite so trampled down.

See also: Missouri Student Protesters Seize Power — And They're Not Giving It Back

But in the days immediately following those celebrations, now two weeks ago, any sense of accomplishment was accompanied by a growing panic. On Monday, Wolfe resigned, and by that Tuesday night, the calls to shut down campus grew very loud. Social media’s drum had drawn near. The social movement Concerned Student 1950, the group from which Mizzou’s current uprising for equal racial treatment takes origin and heft, argued that the university’s lack of action on these threats was yet another bullet point in a bigger story about the devaluing of black students.

Ben Park logged on to his Mizzou email account around 10 P.M. and found 20 student messages awaiting him. Some of the students in Park’s U.S. History to the Civil War class, which has an enrollment of about 300, wrote that their parents were concerned about their safety on campus, but that they were willing to attend class if Park chose to have it. Others wrote, “I really don’t feel safe. I am not going to be attending. I hope you will not count that against me,” as Park recalls. The email count ran to 40 or 45 by midnight, and, having been engaged now for two hours, monitoring, reading Twitter, he rethought his original wait-and-see approach. He’d seen the responses to the email sent by Professor Dale Brigham, who’d originally refused to move an exam. A screenshot of Brigham’s email to a student had circulated, reading, “The only way bullies are defeated is by standing up to them. If we cancel the exam, they win; if we go through with it, they lose.” The reaction struck Park.

“That actually kind of chastised me, in a way, for being so hesitant in canceling class,” he says. Park cancelled.

See also: Idiot "Preacher" Gets Punched at Mizzou After Invoking the Death of Michael Brown

At 1:50 Wednesday morning, police arrested a different Park, Hunter Park, a 19-year-old found in a dorm room more than 90 miles away. This Park had allegedly outright wrote he was going to shoot every black person, and had referenced the Oregon shooting. The university announced the arrest just after 6 a.m. An hour and a half later, Jonathan Butler, an original member of CS 1950 whose hunger strike brought the movement early national attention, tweeted, “How Mizzou responds to the threat on Black lives today will dictate the progress of the school for the next 10+ years.”

At about 9:30 a.m., the CS 1950 account referenced a bomb threat at the Student Center in April: “Do Mizzou folks remember how fast the SC was cleared when there were bomb threats? Meanwhile the BCC & black students get threatened &…” Campus remained open, and Mizzou maintained that police were handling every threat as it appeared. But only the one was publicly tamped down, and unease pervaded.

You needed only to stroll down Rollins, a main campus drag, to confirm how many had chosen not to be around. The busses serving campus were practically empty. By 4 p.m., only about 6,000 people had passed through the Student Center, compared to about 13,000 the prior Wednesday. Only about half as many people as usual were at Ellis Library. Kyra Haas, a freshman, tweeted a photo of her morning political science class, which has an enrollment approaching 500. She estimated 50 to 75 people were there. The teacher had told them to stay home if they didn’t feel safe. “You can be afraid and not want to come to class, or you can just not want to come to class and you’re not going to get penalized,” Haas says. “As college students, I feel like a lot of people, if you have an excuse to not go to class, they’re not going to go.” Judging from the dozen or so students I approached, maybe a quarter of classes were cancelled, while many other teachers made attendance optional.

Dale Brigham, the nutrition professor who’d urged a student to come to class by stating, “If we cancel the exam, they win,” had quickly become the subject of ire. His email had rung as a hollow attempt to rouse a student body whose fears he hadn’t grasped. The win-lose thing struck a particular nerve, and the response that resonated had been, essentially: What makes you think this is a game? After the email ping-ponged through the Internet, he softened his view, writing to the class late Tuesday night that the exam could be taken on Wednesday or at a later group make-up time. The next morning, he sent another email, canceling Wednesday’s class. By then he’d decided to offer his resignation. “If my leaders think that my leaving would help, I am all for it,” he told KOMU, the NBC affiliate in Columbia. That resignation was not accepted. (In an email declining my offer to talk, Brigham wrote that students, colleagues and teachers have supported him, and that life is good.)

I met Garan Johnson, a junior from Kansas City studying computer science, inside the Student Center late Wednesday afternoon. Johnson, who is black, is in Brigham’s class. He was suspicious of Brigham’s claim that he was unaware of the severity of the threats when he first formed his response. “I felt, with all the emails he was getting about concerned students, that he should have known something was going on,” Johnson says.

As for Jonathan Butler, by the end of that Wednesday, he was far from impressed by how Mizzou had handled the day he’d deemed so pivotal. The attitude from administration, he says, was evident in a tweet sent out at the peak of hysteria the night before by the university’s official emergency account, which asked students not to “spread rumors.” Butler felt classes should’ve been cancelled. At the Black Culture Center, black students were doing their own occasional perimeter checks, and operating by the buddy system. Not until Thursday, after an overnight incident in which the word “Black” on the Center’s sign was spray-painted over, did police take up patrol in the parking lot.

Butler says that was “not an administrative response,” but an “external response.” As in: administrators weren’t deciding on their own to provide security for a fearful black community. They'd had to be urged. University Spokesman Christian Basi told me that police added the patrol “following University leadership,” and after several conversations with individuals within and outside the university. Both declined to be more specific. I asked Butler if he would dispute Basi’s characterization, and he said it would depend on Basi’s definition of leadership. “There were students on campus who were very concerned and it did take outside forces who found out about this via social media,” he says. The state highway patrol eventually appeared here, too. As the week wore on, traipsing through campus, you felt watched.

By the end of the week, two men of color had been placed in administrative roles on an interim basis. Chuck Henson, a law school associate dean, took on the new position of Vice Chancellor of Inclusion, Diversity and Equity. Michael Middleton, a retired law professor and civil rights attorney, is the new UM System president. Butler, who I spoke to that Friday afternoon at the end of a whirlwind week, says Henson had already stopped by the Black Culture Center: “He offered himself as a resource and was genuine.” Henson’s name also appeared that week on a letter to students, additionally signed by the provost and interim chancellor. “The process of making our campus as inclusive as it must be,” it read, “will not be easy.”

That process has begun under a fading sense of apprehension. Each day without incident puts the threats a little further in the past. But social media has continued to cause anxiety. After the November 13 Paris attacks effectively shifted public attention away from Mizzou’s campus, some online aggregators started piecing together posts filled with tweets downplaying France’s tragedy in favor of the situation at Mizzou – with the implication that student protesters were callously lamenting not the loss of life, but the distraction from their moment. The university then issued a statement saying that posts were coming “from outside the Mizzou community.” The perpetrators' aim, the statement read, was “to create conflict.” By that measure, they had succeeded.

Shawn Shinneman is a grad student in the School of Journalism at the University of Missouri, where he works on campus at Investigative Reporters and Editors. Send him an email at sdsfz9@mail.missouri.edu or tweet him @SDShinneman.