For Syrian Refugee Building a Life in St. Louis, Backlash Is Crushing 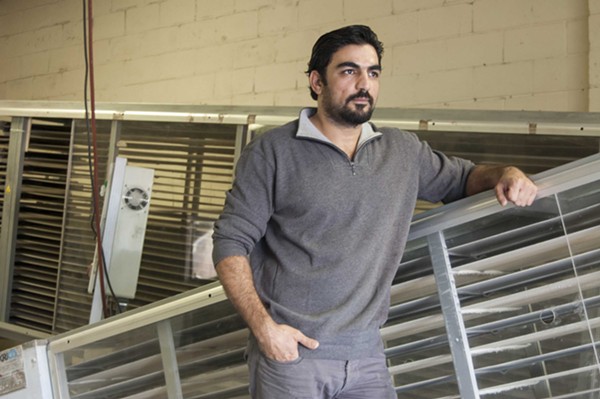 There was once a country called Syria. Today, we know this place for its cities devastated by civil war, its charging armies and a president turned dictator. The name also conjures images of hooded ISIS fighters, a black flag and rivers of blood. For those who escaped the horrors of war and ISIS, Syria is a memory.

Alaa Alderie remembers. Once a banker, he grew up in Damascus, a progressive city where he says you could walk the streets with your girlfriend or grab a beer without a second thought. Perched on a low chair inside Cham Bakery, which his family founded last year in a warehouse on Manchester Road in St. Louis, the 31-year-old says the Syria of his youth became unrecognizable after it plunged into civil war in 2011.

"I went to the streets, I demonstrated. Once the government held weapons against the people, the people took weapons and fought back," he says in halting English. "I could not sit there doing nothing. I tried volunteering, getting clothes for people that lost their homes, medicine, stuff like that."
But Alderie did not take up arms himself. He'd already seen friends and acquaintances tortured and imprisoned. So he fled Syria with his family in 2012 to join a brother who had moved to St. Louis in 2010. The family was given asylum status, and they set about rebuilding their lives. That includes a growing business — Cham is the city's first wholesale pita company, providing restaurants and groceries across the city with neatly stacked bags of flatbread.

Alderie wishes more Syrian lives could be rebuilt. He's thankful for St. Louis organizations like the International Institute, which he says provided business loans and marketing advice. But last week's ISIS-linked terrorist attack in Paris has sparked a wave of anti-refugee sentiment, fueled by an age-old paranoia that accepting outsiders would risk the safety of Americans.

To date, more than half of all U.S. governors have said they won't allow Syrian refugees to resettle in their state. Missouri Governor Jay Nixon has stated that the matter isn't a state's issue and should be handled by the Federal government. But with polls showing a clear majority of Missouri voters oppose allowing Syrians to enter the country, local politicians are now demanding Nixon halt what one lawmaker called "the potential Islamization of Missouri."

"It's crazy," Alderie says of the sudden opposition to aiding refugees. Before the Paris attacks, Alderie thought that American sentiment toward Syrians had softened as images of mass deaths and orphaned children filled TV screens. Maybe, he had hoped, Americans were finally moving on from the anti-Muslim sentiments that ran rampant after 9/11.

Events of the past week have dashed those hopes.

"People are afraid of the Syrians, that if they came, maybe ISIS will come in," he says. But Alderie knows firsthand the rigors of entering America as a refugee. He endured an eight-hour background check and interrogation process at the airport. Even now, he says he's careful not to text or email about certain subjects (like American military actions in the Middle East) because he assumes he and other Muslims are being closely watched by the government.

In fact, Alderie thinks the current standards for accepting refugees are too harsh, especially when it comes aiding children in need of medical attention or young mothers. It's not an opinion he sees reflected in recent headlines.

Citing concerns about ISIS agents posing as refugees, the Republican-dominated U.S. House of Representatives passed legislation on Thursday seeking to halt President Barack Obama's plan to admit 10,000 Syrian refugees in the next year. Obama has vowed to veto the bill, but the message sent to resettled Syrian refugees like Alderie is a harsh one.

"Its really sad," he says, to be associated with the same people who destroyed his and his family's life. "I’m a Muslim, I lived in a Muslim country. All the people I was raised with, everyone, they were just like me. I never seen anyone like ISIS, I never met anyone like them."

Days after the Paris attack, someone shouted "go back Arab" as Alderie passed a stop sign. It was only the second time he's encountered face-to-face bigotry St. Louis, he says.

It hasn't changed his feelings about the city or its people.

"I don't like to think about it," he adds. "Maybe some people just had a bad day."