Barriers Be Gone! Trolley Construction Finishing Up in Delmar Loop 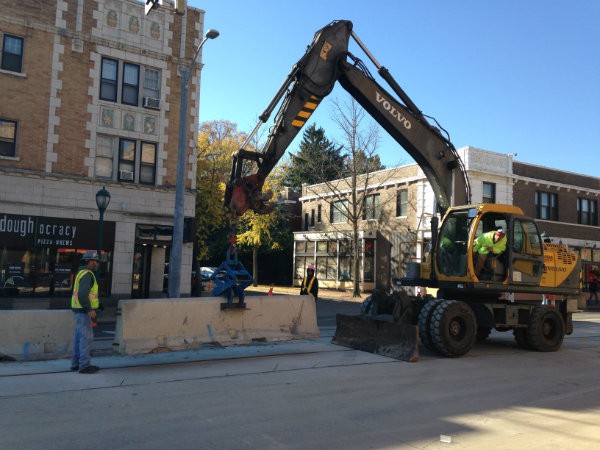 Our long local nightmare is nearly over.

Construction crews on Tuesday in the Delmar Loop began began hauling away the concrete barriers that cut off pedestrian crossings, blocked parking in front of dozens of storefronts and made driving in the district a pain that many people preferred to avoid.

“Parking is back,” promised Joe Edwards, president of the Trolley Transportation Development District. “Everything in the Loop will be like it was before.”

Well, almost like it was before: There are now two sets of tracks embedded in the rebuilt roadway, part of the 2.2-mile trolley route expected to start shuttling people between University City and Forest Park in late 2016. The bulk of construction on the controversial $43 million project was finished on Monday as workers poured a stop in front of the Peacock Diner — one of several businesses owned by Edwards in the neighborhood.

And despite the good news for Loop businesses, construction isn't totally over. The last major headache comes next year when crews will lay the tracks through the busy intersection of Skinker Boulevard and Delmar. Construction crews will work in two, ten-hour shifts to finish that section as quickly as possible, Edwards said.

In the mean time, a few parking spots along the route will still be blocked during the coming days as workers install light poles, but contractors honored business owners’ wishes to reopen the street before Thanksgiving, clearing the way for Christmas shoppers.

Two of the retro trolley cars set to cruise the route are being refurbished in Ida Grove, Iowa, and more are on the way, Edwards said. Once the electric, fixed-rail system is in place, every foot of the route will be inspected. Training is expected to take several more months.

So no trolley rides for a while, but at least we can walk across the street again.