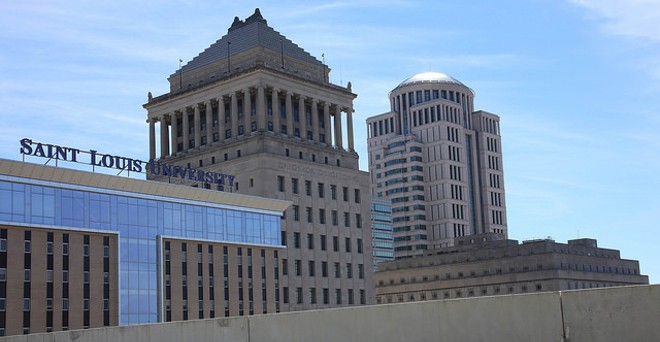 Last year, when the Saint Louis University School of Law hosted St. Louis County Circuit Attorney Bob McCulloch, students involved with the social justice movement were not happy. McCulloch, of course, led the grand jury investigation into the Ferguson police officer who'd shot an unarmed teen — and was criticized heavily for his role in guiding the jury to a no bill.

But when students met with the dean of the law school, Michael Wolff, he persuaded them that the event was worth having, recalls Britta Thornton, who was part of the group. "A university is a place where different voices come together," Thornton recalls. "A place where people can voice opinions, even if they aren't popular."

And that's one reason that Thornton and other alumni and students are now questioning the university's handling of a different, equally controversial speaker. Yesterday, the SLU chapter of Law Students for Reproductive Justice had planned to host Linda Raclin, the chair of the board of trustees for Planned Parenthood in St. Louis. But at the last minute, after pressure from the university and a meeting with SLU president Fred Pestello, the students agreed to move the event off campus. Raclin spoke, instead, at the Omni Hotel.

Thornton, for one, questions the pressure the university's president brought to bear.

"If they really want to use 'academic freedom' as an argument, they need to be consistent," she says. "They need to allow people with different views to come — and allow people to express controversial views."

Interestingly, the Law Students for Reproductive Justice have been active on the SLU campus for several years. Thornton says she is not aware of any previous problems with speakers or events being pushed off campus.

But Jeff Fowler, vice president of marketing and communications for SLU, says that he believes this is the first time a Planned Parenthood official has been slated to speak on campus. Dr. Pestello asked to speak to the students because he heard from numerous people with concerns about that, Fowler says — both Jesuits and students.

"I think he wanted to find a collaborative way to find some common ground," Fowler says, stressing that the decision to move the event was ultimately the students'.

Still, there is great irony in Raclin's talk being moved off campus: Raclin used to be an assistant professor at the SLU law school — even while, at the time, she served as a Planned Parenthood board member. Apparently too controversial to bring in as a guest speaker, she wasn't too controversial to hire.

And the controversy may have had the effect of bringing more attention to her talk, suggests Nina McDonnell, a first-year law school student. "I would guess it actually increased attendance. I know it did for me. I had to rearrange my schedule to be there — but I was not going to miss it," she says.

Sure enough, she says, "it was packed."