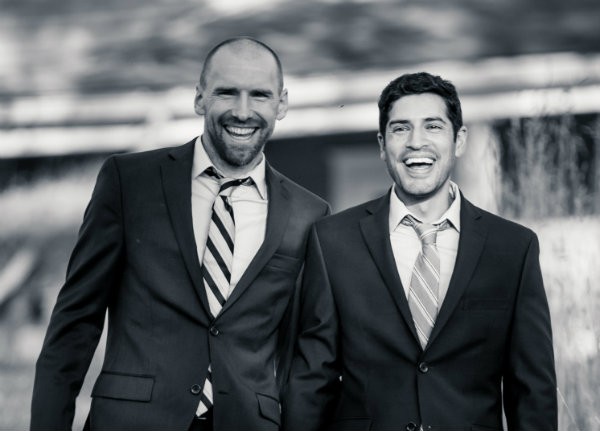 Shaun Murphy and Aaron Lopez were still basking in the glow of their September wedding when they decided to send out marriage announcements. They contacted newspapers in the small Michigan town where Lopez grew up and ones in Iowa, where Murphy lived until he was in fourth grade. No trouble whatsoever.

Then Murphy reached out to the Lake Gazette in Monroe City, Missouri, where he'd moved as a fourth grader and lived in during high school.

The editor confirmed that they published wedding announcements, and that the service was free. She said he could send theirs over. He did.

But then the process grinded to a halt.

"It was three weeks of 'maybe we will, maybe we won't,'" Murphy says. "I wasn't getting any direct answers." Weary of pressing the editor, he ultimately reached out to the newspaper's parent company, Lakeway Publishers. There he was finally connected to a vice president who identified himself as Walt Gilbert.

"I didn't want to leave you hanging," Gilbert told Murphy, according to Murphy's recollection. "We're not going to publish your wedding announcement." The newspaper chain, Gilbert said, was studying "how the industry was going to respond to this" — "this" presumably being same-sex marriage. Then he got off the phone.

After Murphy and Lopez were rebuffed, they talked to friends in Monroe City, which is about 30 minutes west of Hannibal, just north of St. Louis. Those friends said they'd place advertisements in the Lake Gazette congratulating the couple. They, too, were turned away.

The backing from friends and family in Monroe City is one reason Murphy doesn't blame his old hometown. He knows that people there have been supportive — going back to when his mother was new in town and going through a hard divorce. He still remembers how a teacher helped them find housing, how the kind-hearted townsfolk helped get them set up with everything they needed. He's certain the town is more open to same-sex marriage than its out-of-town newspaper publishers are giving it credit for.

"I don't want anyone to say anything bad about my hometown," he says. "But we want the publishing company to change their policy."

Based in Tennessee, Lakeway Publishers owns 23 newspapers in four states, as well as 14 other media outlets. All of them are small newspapers in small towns. In Missouri, that includes the Bowling Green Times, the Elsberry Democrat, the Hermann Advertiser-Courier, the Lincoln Co. Journal, the Louisiana Press Journal, the Newstime, the Centralia Fireside Guard, the Vandalia Leader and the Troy Free Press.

Perhaps the most dispiriting thing, Murphy says, is that the newspaper's stance is perfectly legal. Unlike Iowa, where he was born, and Wisconsin, where he lives now, Missouri does not include being gay as a protected class in its anti-discrimination laws.

"Living in Iowa, Minnesota and Wisconsin, I've always been protected," he says. "But when we go home, a business like this can say 'we won't serve you' — or, if we wanted to stay overnight, we could get kicked out of our hotel for being gay. We want to get the word out about that."

The New York Times began accepting announcements of same-sex "celebrations" in 2002, two years before even civil unions were an option for gay couples in most states. That decision made headlines, but the tide has since turned so completely that when a Mississippi newspaper publisher announced he wouldn't accept same-sex announcements earlier this summer, it made national news.