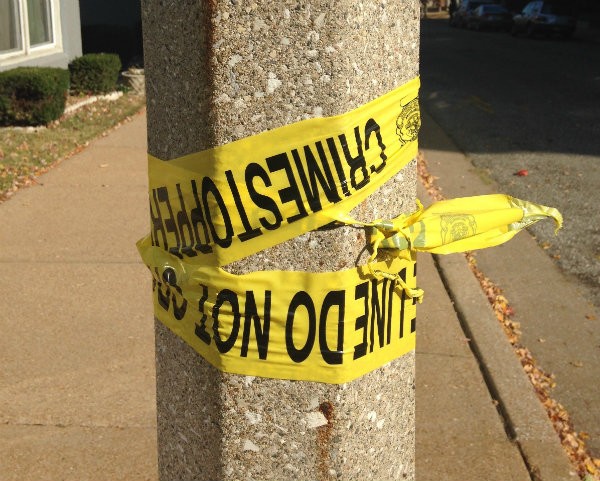 Update, 10:20 a.m. Thursday: Police have identified the two men found shot dead in a car on Wednesday night in South City. Harris Hajdarevic, 22, was behind the wheel, and James Cobb, 23, was in the passenger seat, authorities said. The car they were in crashed into a parked vehicle after the shooting. They both died at the scene.

Go to this link to help contribute to Cobb's funeral expenses.

Update, 5 p.m.: A St. Louis Metropolitan Police officer shot the mother of homicide victim in the leg on Thursday afternoon in a bizarre twist in a double-murder investigation, authorities say.

The officer was accompanying family services about 3 p.m. inside a house in the 4400 block of Taft Avenue to remove a one-year-old child when a pit bull bounded over a waist-high kitchen gate, police Chief Sam Dotson said at a news conference.

Family members in the house couldn't control the charging dog, Dotson said. The officer fired once, missed the animal and nailed a 42-year-old woman in the leg. She was taken to the hospital with a "minor, non-life-threatening injury," he said.

Detectives had visited the Bevo Mill house the night before after the two men were shot to death in a car out front.

Dotson didn't specify the woman's relation to the slain men, but the St. Louis Post-Dispatch is reporting she was the mother of one of the victims.

Two men were gunned down inside a car on Wednesday night in South City, authorities say.

Metro officers responding at 10:38 p.m. to reports of a shooting found the victims’ lifeless bodies inside a bullet-riddled sedan in the Bevo Mill neighborhood. Police have yet to publicly identify the men but said they each suffered “multiple gunshot wounds” in the attack.


The men were discovered in the 4400 block of Taft Avenue, a residential neighborhood lined with tidy brick houses near a string of industrial businesses along Ridgewood Avenue.  The killings bring the homicide total within the St. Louis city limits to 167 in 2015, soaring past last year’s death toll of 159.

See also: St. Louis Is Heading Towards the Most Homicides in Decades. How Can We Stop the Bloodshed?

Six people have been killed in Bevo Mill since the start of the year, more than the past two years combined, according to police crime stats. The crime scene is about six blocks north of a boarding house where two people were shot dead in late March.

It's also near where police say Zemir Begic, a 32-year-old Bosnian refugee, was beaten to death by hammer-wielding teens in December 2014. His death sparked outrage in the Bosnian community, leading to street demonstrations and calls for justice.