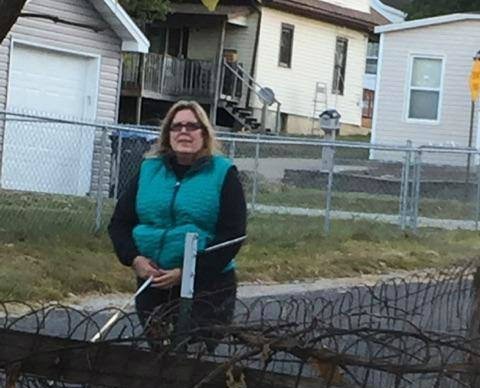 For weeks, the Dersch family of Columbia, Illinois, had been tormented by a vandal who appeared to have become increasingly unhinged by the "Black Lives Matter" sign they'd erected in their yard — with the repeated destruction of the sign escalating to the gift of a dead raccoon and salt in their flowerbeds.

So when one of Dersch boys spotted a woman pouring salt on their vegetation around 7:30 a.m. on October 16, Sue Dersch knew what she had to do. She hopped in her car and followed the woman, who was on foot — and managed to snap a photo.

The photo turned out to be the breakthrough police were waiting for. After police circulated the image last week, saying it showed a "person of interest" and asking for help identifying its subject, they announced late Friday that they'd charged Kathryn Stout, 62, in five different incidents of vandalism at the Dersch home. She now faces four misdemeanor counts of criminal damage to property and one count of disorderly conduct.

All signs point to a motive that was not personal, but political. Stout apparently lives nearby, Sue Dersch says, and Dersch's 32-year-old daughter went to school with her son. But there is no history of interaction, much less animosity, between the families. Police told Dersch that, when confronted with evidence of her crime, Stout trotted out the old chestnut about how she believes all lives matter. Then she said she wanted to talk to her lawyer.

The state's attorney apparently contemplated hate crime charges, which are felonies. But, Sue Dersch tells Riverfront Times, she was told that they couldn't prove that Stout knew that the home had black residents. (Dersch is white, but her adopted sons are black.) "They just didn't have the evidence to charge her with it," she says.

But they appear to have plenty of evidence in the misdemeanor case. Columbia Police had helped set up surveillance cameras at the Dersch home after the dead raccoon was found in their yard. A few weeks ago, they brought surveillance photos to the Dersches to see if anyone could identify the person shown in them. They couldn't, and the photo wasn't clear enough to show around — but after Dersch snapped a shot of her own from her car a few days later, it was clear that her photo showed the same person.

Stout is due to enter a plea at the Monroe County Courthouse on November 19.

Sue Dersch praises the work of the Columbia Police. From the time the family first called them, she says, "they have been very responsive. We expected them to be dismissive of it, and we thought we'd have to fight to get them to pay attention to it." That, she says, has been far from the case.