Forget the Naysayers. Bicycling in St. Louis Can Be Bliss 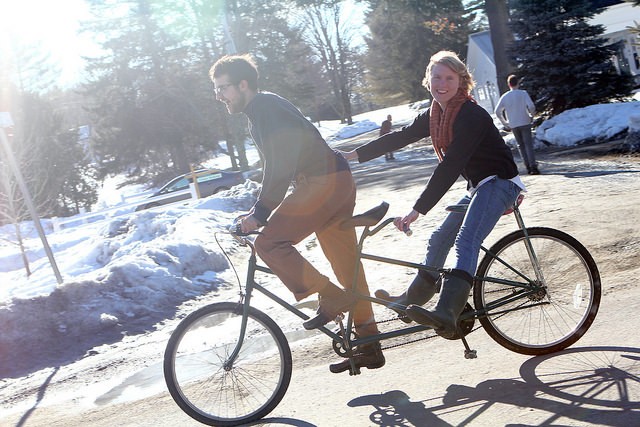 Only recently did I start keeping track of how many miles I bicycle. Convinced by a fellow bike nut that I ought to again measure my distances, I gave in.

As someone who lives in a world chock full of numbers, metrics, and statistics, it’s a little odd that I held out so long on keeping a tally on speed, time, and distance. The truth is, I was a bit scared: I was afraid that assigning numbers to something that gives me such sheer joy would diminish it somehow. Thankfully it hasn’t, but riding to and from work (and often a school or two along the way) gives me such pure, unbridled, wind-in-your-face, shout-yahoo!-going-down-a-hill, hands-off-the-bars-doing-your-best-Phil-Collins-drum-solo-imitation joy every day that I was more than a little superstitious about messing with it.

See also: I Ride My Bike to Work, and It's Terrifying

Sure, riding your bike to get around has a whole host of tick marks in its favor: fewer pollutants in the air, more exercise, less money spent on the evil triumvirate of car ownership (gas, maintenance, and depreciation), better parking, exceptionally good-looking legs, an increased ability to eat bacon-topped donuts. You get the idea. And, yeah, honestly, those factor into it because, seriously, who doesn’t like going to an annual physical just for the ego boost?

But if I’m honest with myself, I’m kind of lazy. There’s no way that I’d keep riding my bike through all sorts of weather if it weren’t just so goddamn fun. Every time I hop on and start pedaling, I’m ten years old again. That’s a valuable commodity when you’ve blown past the four-decade mark.

I started commuting by bike because I didn’t want to buy a second car. Then I noticed the pounds coming off – a huge benefit. And only then did I realize how much fun I was having. Twice a day, I wasn’t sitting in or staring at a box, I was outside. I was free. And this fulfilled a need I had never imagined I had. I can’t quite say it was a religious awakening (I have promised to never become evangelical), but I imagine it wasn’t far off.

If I think deeply about it, humanizing the chores of transportation is why I look forward to my two-wheeled commute every day. When I ride, I get to say hello to my neighbors, wave at the other bike commuters, and smell the change of the seasons. On days when I bike with my kids to school, I get an extra twenty minutes with them doing something we all enjoy instead of silently cursing the other traffic. When I have to drive, I’m isolated from all this. It’s no wonder distracted driving is such a problem; we need something to take our minds away from being so disconnected.

St. Louis, of course, isn't the perfect place to get around by bike. It's been pointed out to me many time that roads can be dangerous. And undoubtedly I have played the “are they texting, calling, drunk, or high?” game far too many times. There’s a whole lot we could do to make it easier and safer to bike around the city, both with infrastructure and an attitude of mutual respect. Remember, that’s a person out there, not just an obstacle.

And yet St. Louis is in the enviable position of not having been built for the automobile. Platted and built in the time of horses and trolleys, there’s almost always a way of getting from one place to another that would be incredibly slow in a car, but is pretty damn nice on a bike. I honestly feel our best investment in infrastructure comes from building the connectors that enable people to use the existing network of quiet neighborhood streets and go over, under, or around barriers like freeways, railroads, and major arteries. Connecting those places where people live, work, go to school, and play ultimately leads to the sort of human-scale city we all desire.

In the mean time, though, go swing your leg over your top tube and enjoy the colors of fall for the fleeting moments they are here. Go get some joy.

Dave Lloyd lives in scenic south St. Louis. He can be found on his bike, chasing after his four children, or both. You can reach him on twitter at @ibikestl.