From St. Louis to Cooperstown, With Love 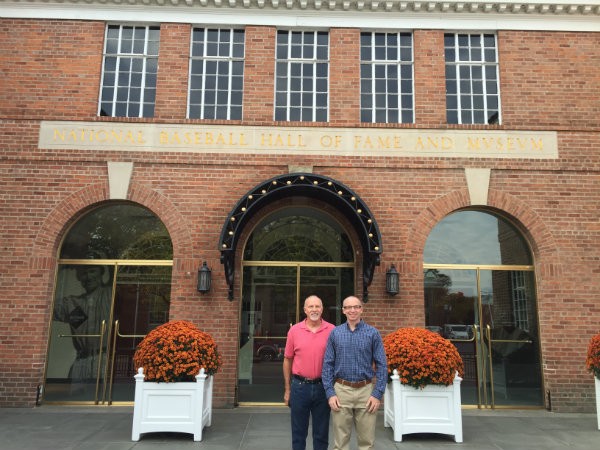 I took my dad to Cooperstown last month. And watching him peek into Stan Musial's locker at the National Baseball Hall of Fame seemed to bring our family's baseball story full circle.

"My father always wanted to leave early,” he said, remembering. He's now 64; his first game was back in 1958. “Plus, we sat in right field at Sportsman's Park where there was a fence and no chance to ever catch anything. I always wanted to go to left field where Musial would throw balls into the stands. But, your grandpa made me sit there because it had easy access to get out and beat the traffic."

I've been a huge baseball fan my entire life, which probably makes sense for a kid who grew up in St. Louis. Perhaps it was watching Ozzie Smith do back-flips when the Cardinals took the field. Perhaps it was getting to stay up past my bedtime until Jack Buck finally said the words, "that's a winner.” Or perhaps it was going to Busch Stadium with my Dad and learning what makes truly makes baseball America's favorite past time.

My baseball story is probably a lot like yours. Dad introduced us to the game of baseball. We played catch, collected cards and went to watch the Cardinals play at Busch Stadium. Sound familiar? Probably, although odds are your dad parked a lot closer.

We were dirt poor – though, to be honest, we didn't really know it at the time. My parents had divorced and Dad worked in a warehouse, shipping boxes of air conditioning valves. Like many other single parents who magically find ways to stretch a dollar, our dad made certain that we experienced Cardinal baseball early on. Our first taste of baseball heaven came in the mid '80s. Bleacher seats were $2. On days when there was a giveaway, we'd get there early. Hot dogs? Nachos? Nope. Our stadium snacks consisted of Kool-Aid in a Tupperware mug and a plastic bag of plain label peanuts and pretzels that we brought with us.

"I told you boys that you had to be well-behaved or we wouldn't go back,” Dad recalls. “You and your brother didn't ask for anything. Even total strangers in the bleachers would comment on how well behaved you both were." It's impossible to recall your mindset at seven years old but clearly we understood that the focus of a trip to the stadium wasn't to run around, or beg for an overpriced foam finger or cotton candy – it was to soak in this magical game of baseball. We learned the rules, always came equipped with a glove to catch a foul ball and, for God's sake, don't even dream about leaving before the last out of the last inning.

In the picture-perfect setting of fall in Cooperstown, New York, we stepped foot into a place where fathers and sons have been sharing sweet memories for decades. I'd certainly love to believe that only in Cardinal Nation do we get to cherish that special baseball bond, but it absolutely transcends teams, cities and races. Yes, even Cubs fans.

One young boy posed for a picture in front of Babe Ruth's jersey while his father snapped the perfect shot with an iPhone. Another father and son duo — they were from Gettysburg, Pennsylvania — couldn't get up the stairs fast enough to see the memorabilia on display for their favorite team, the Baltimore Orioles. A gentleman from Detroit pushed his 80-year-old father in a wheelchair from exhibit to exhibit. "Hold on Pop, I'm gonna push you in here for a nice picture," he said as he guided the chair into a mockup of Hank Aaron's locker. They were Tiger fans and made the drive down to upstate New York.

As we explored the museum, each item behind glass brought up personal reflections of our baseball memories. A bat used by Mark McGwire to hit his 70th home run, a helmet worn during the game that Fernando Tatis hit two grand slams. A glove belonging to Ozzie Smith reminded us that my Dad wanted to name my brother after the Hall of Fame shortstop. The Cardinals were playing game 2 of the 1982 World Series when he was born. My mother apparently resisted the notion of an “Ozzie Clevlen” — instead I wound up with my little brother Brian.

In the museum store, my Dad spotted another Cardinal fan with a Bob Gibson jersey, which drummed up more childhood memories. "Gibson was my favorite!" he told the stranger. With a smile, the man replied, "Thank you, sir! Mine, too!"

As we ended our visit with a stop to Doubleday Field around the corner, a man from Philadelphia kindly took our photo sitting in the bleachers of the historic stadium. "You're smart to take this trip with your Dad while you still can," the man said. "I wish I would have done the same thing when my Dad was alive."

Asked if I was going to buy a tee shirt or a key chain to remember our visit to Cooperstown, I told my dad, "Nah, I don't need another tee shirt.” Truth is – I won't need anything to remind me of our visit. I will absolutely never forget it.

Bill Clevlen is a travel writer and radio host based in St. Louis. He covers travel across America on billontheroad.com and hosts the nationally syndicated travel radio show Bill On The Road.

At the RFT, we welcome well-reasoned essays on topics of local interest. Contact [email protected] if you've got something to say.