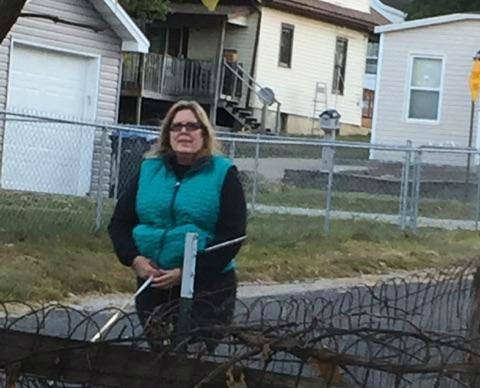 UPDATE on Oct. 21: A woman has been identified! See our update at the end of the story.

We've reported quite a few times this fall about a disturbing situation in Columbia, Illinois — in which the Dersch family's "Black Lives Matter" signs were repeatedly vandalized. Then a dead possum was left in their yard. And then someone spread salt in their gardening beds.

Sue Dersch, the family's matriarch, told Riverfront Times that police in Columbia seemed to take the matter quite seriously — perhaps because it continued to escalate in a way that suggested someone had become a bit obsessive in trying to stop the family's message. Surveillance cameras were installed. Reports were taken.

Today there finally appears to be a breakthrough in the case. Columbia Police have issued a news release and a photo, saying the woman depicted above is now a "person of interest" in the case. They write,

This photo was taken near Centerville Avenue and Kremmel at approximately 7:15 a.m. on Friday, October 16th. This person is wanted for questioning in a Criminal Damage to Property investigation. If you believe you know who this person is, please contact the Columbia Police Department at 618-281-5151.


Officially, this woman is not being accused of any wrongdoing. But the photo was apparently snapped soon after someone again poured salt on the Dersches' plants last week. Yes, really.

Internet, do your thing.

In less than a day, police say they were able to identify the woman in the photo. "With the assistance of our community members, we have the person identified and are continuing our investigation," the department wrote on Facebook. "Thank you to everyone who either called the Police Department or shared the post. Should you have any additional information to provide for our investigation, please call the Police Department at 618-281-5151. Thank you."

We reached out to the Columbia Police yesterday but have yet to hear back. We'll continue to monitor this story and keep you posted with further developments.