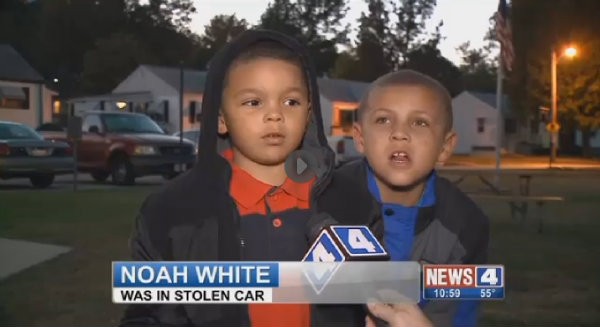 Noah White seemed to have no idea how much danger he'd been in — and that's a good thing.

The five-year-old boy gave an interview to KMOV yesterday about the kidnapping nightmare he experienced Friday night in Flordell Hills, a tiny hamlet in north St. Louis County, when a carjacker allegedly commandeered his father's vehicle while little Noah was asleep in the back.

Fortunately, the man who stole the car had compassion once he discovered the little boy. As Noah recounts it to Alexis Zotos of KMOV in the video below, the thief told him, "I'll take you home."

But, Noah adds plaintively, "And then he lied and said, 'Hop out in the middle of the street.'"

Thank God for that: A kindly stranger came upon Noah wandering around the street in north St. Louis, about a mile from where his family had been carjacked. "This person said, 'Where your family?' and I said, 'I'm lost,'" Noah told KMOV.

This one, clearly, could have been much, much worse. See the complete video below. Anyone with information about the incident is asked to contact the Flordell Hills Police.