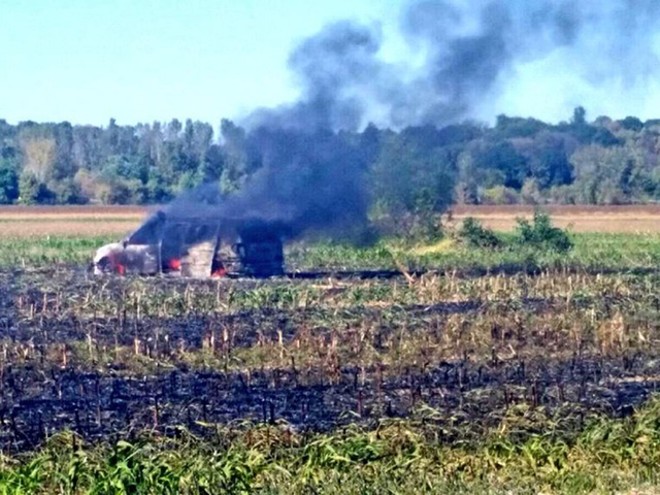 A man in Liberty, Missouri, had a novel plan to put out a garbage fire raging in his field yesterday: The guy drove over the fire repeatedly in a van loaded with ammunition.

The Clay County Sheriff apparently stumbled onto this frightening scene yesterday afternoon. As the Kansas City Star explains it,

The deputy had been in the middle of a traffic stop when he saw black smoke on the horizon and headed that way to investigate. Eventually, the deputy found the owner of the vehicle watching the fire from a distance.

The deputy learned that the owner had been burning garbage in the field and accidentally let the fire get out of control. In an attempt to put the fire out, he drove his van back and forth over the flames. This made matters worse, as the tires of the van caught fire. Realizing that the van was loaded with firearms ammunition and a full tank of gas, the driver evacuated the area for safety.

But we got to thinking. Maybe we could put this Missouri-based Einstein in charge of putting out the Bridgeton garbage fire. And if you thought a garbage fire + live ammunition was fun, just wait to 'til you get a load of all that plus radioactive waste!

In the mean time, how about that Missouri Man? He just might give Florida Man a run for his money....

We welcome tips and feedback. Email the author at sarah.fenske@riverfront.com