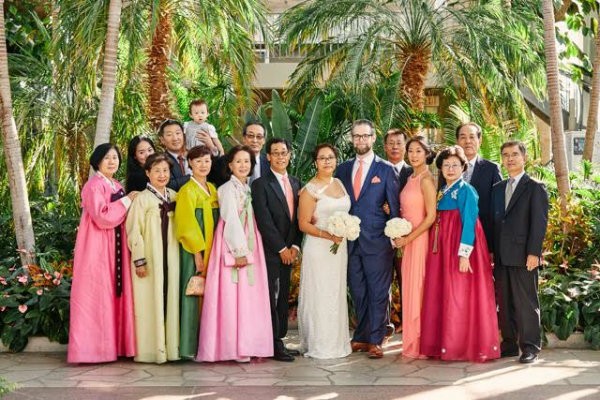 A trio of brazen thieves swiped a wedding party’s luggage from a rental van, unloading irreplaceable gowns bought in Korea along with cameras full of pictures from the big day, authorities said.

Bride Irene Wan told the Riverfront Times that nine of her guests visiting from overseas were touring the Arch on Sunday when the crooks forced open the van’s door and helped themselves. “My mom went to Korea to buy the dresses for this occasion, and now they’re just gone,” she said.

Wan married her sweetheart, Michael Sweeney, during a picture-book ceremony on Saturday at the Jewel Box in Forest Park.

“Everything was great,” she said. “The weather was perfect.”

One of the highlights was the long, traditional dresses worn in bright colors by relatives who’d flown thousands of miles to California, and then roadtripped to St. Louis for the wedding. The guests planned to spend Sunday sightseeing before driving back to the West Coast and flying home, Wan said.

Her father parked the rental around lunchtime on North Memorial Drive near Pine Street. Shortly after they walked away, police said, a newer black Dodge Ram pickup pulled up to the spot. Two men hopped out while the driver stayed behind.

The men punched out the van’s door lock, hauled away the luggage in broad daylight and drove out of sight on Pine, authorities said.

“It’s just shocking it happened in the middle of the day on a busy street,” Wan said.

Along with the dresses, the thieves fled with passports, jewelry and both an iPad and the digital camera Wan’s father used to record the ceremony. The loss of the gowns hurts the worst, Wan said. “It’s a part of the culture, like someone stole your family crest,” she said.

Cops have only a vague description of the three men, believed to be in their early 20s, and the Ram — the Big Horn Edition model — didn’t have license plates.

Vans have become a popular target in St. Louis. Criminals hit a string of touring bands during the summer, walking away with so much high-dollar equipment that some musicians have sworn off the city.

Stolen electronics can be resold, but the pilfered gowns would be worthless to the thieves, Wan said.

“People are just jerks,” she said.