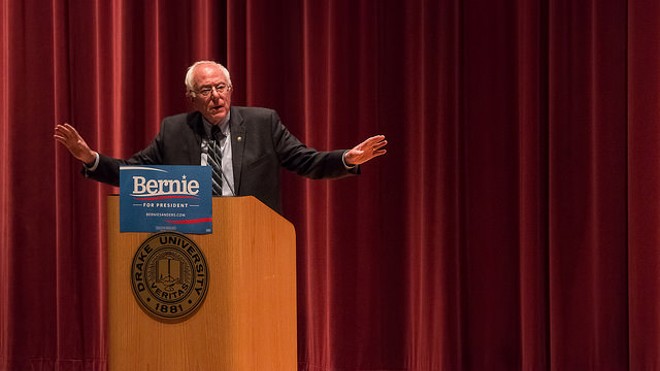 The GOP's vast field of presidential wannabes has already gone head-to-head-to-head twice, but tonight’s debate is the first of the 2016 election cycle for Democrats. Former Secretary of State and frontrunner Hillary Clinton will be in attendance, as will her main challenger, Vermont Sen. Bernie Sanders.

Three other candidates will be on the debate stage: former Maryland Gov. Martin O’Malley, former Virginia Sen. Jim Webb and former Rhode Island Gov. Lincoln Chafee. All three have averaged less than 1 percent in the latest national polls and have been eclipsed by Vice President Joe Biden, who has not even declared as a candidate. Still hoping for a last-second announcement by Biden, CNN is keeping a bubble-wrapped podium in storage just in case. (And yes, as long as the veep announces before the debate, he's apparently eligible to join in — none of these complicated tiers for the Democrats' smaller field.)

Debate coverage will begin at 7:30 p.m., and many locations around Greater St. Louis will be hosting watch parties, perfect for those without cable or who just enjoy getting politically heated in public. Here are some of the many bars, restaurants and other businesses broadcasting the debate.

1. Tick Tock Tavern
3459 Magnolia Ave., no landline — 7 p.m.
A small, cash-only bar, Tick Tock Tavern will be packed for the Democratic debate — more than 100 Bernie supporters have already RSVP’d, according to the campaign's website. Parking is available on the south side of the building, on Arkansas Avenue. Bike parking is also available. The bar is next-door to Tower Grove staple Steve’s Hot Dogs (steveshotdogsstl.com), and they’ll deliver your food right to your table.

2. Lücha
522 N Grand Blvd., 314.833.9993 — 6 p.m.
Located a quarter-mile north of Saint Louis University, across from The Fox Theatre, Lücha is within walking distance for SLU students looking to watch the first Democratic debate of the 2016 election cycle. Lücha will be pairing its $1 Taco Tuesdays with 2-for-1 margaritas and sangrias and $4 pints. For those who prefer to drive, parking is available on both sides of Washington Avenue.

3. MoKaBe’s Coffeehouse
3606 Arsenal St., 314.865.2009 — 7 p.m.
Known for its brunch and vegetarian options in addition to its coffee and its oh-so-progressive politics, MoKaBe’s will be showing the debate for the Tower Grove community. MoKaBe’s serves a full dinner menu, including its celebrated vegan veggie burger, served with Billy Goat Chips. The kitchen is open until 10:30 p.m. Free WiFi is available to all patrons; FTP coffee, however, may cost you.

5. The Royale
3132 S Kingshighway Blvd., 314.772.3600— 7:30 p.m.
This south city pub is consistently the place for political discussion this campaign season. Grab some house specialty fish tacos and a Cherokee Street Margarita (or two) and settle down in The Royale’s courtyard, where the Democratic debate will be shown on the big screen. Free WiFi is provided, and the kitchen is open until 10 p.m.


6. Nebula
3407 S Jefferson Ave., 314.632.6488 — 7:30 p.m.
This downtown co-working space is hosting a debate watch party that is free and open to the public. The debate will be shown on the big screen in the company’s event space. Alcohol is permitted but not provided. This is a perfect place for those without cable to tune in without feeling the need to spend money at a bar or restaurant.


7. St. Charles Stadium 18 Cine
1830 1st Capitol Dr., 636.946.1862 — 7 p.m.
The St. Charles Democratic Party has joined with grassroots supporters of Hillary and Bernie to offer a free watch party at this St. Charles Wehrenberg Theatres location. Tickets can be obtained for free online by RSVPing here. Seating is available for more than 300 people. The theatre’s refreshment stand will be open for purchases. The STC Democrats are asking attendees to consider bringing nonperishable food items that will be donated to a local food pantry.


8. Winfield’s Gathering Place
10312 Manchester Rd., 314.394.2200 — 6 p.m.
This Kirkwood restaurant and sports bar is the perfect place to grab some sweet buffalo wings and catch the tail end of Game 4 of the Card-Cubs series while getting ready for a political face-off between Hillary and Bernie. Arrive before 6 for $1 off all draughts and $2.50 domestic bottled beer.

Got another spot we should let our readers know about? Leave the details in the comments.