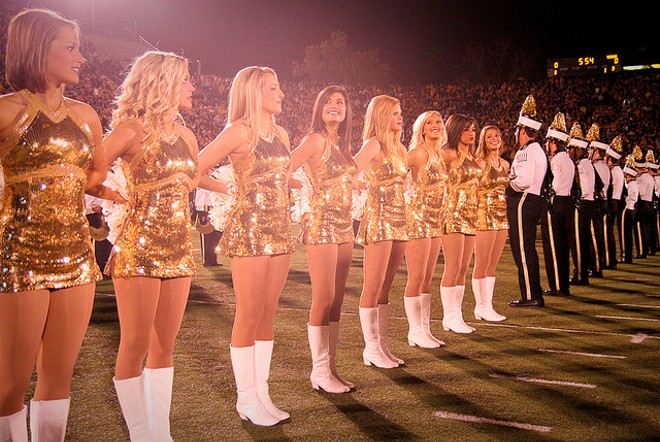 Praise for a Mizzou sorority's "very nice butts" has a local Republican bigwig in hot water, with a campus Democratic club calling for his ouster — and for his organization to be banned from future homecoming events.

Frederick Berry, a previous candidate for the Missouri House and current chairman of the Columbia Pachyderm Club, was apparently walking in the University of Missouri's homecoming parade just behind the Delta Gamma sorority when he paused to tweet how much he enjoyed the view.

So what, exactly, is offensive about that? Turns out, as Berry later confirmed to the Columbia Tribune, "VNB's" stands for "Very Nice Butts."

That said, Berry denies there was anything offensive about a 69-year-old GOP bigwig praising some Delta Gamma derriere. Per the Tribune story:

On Saturday morning, Berry said, he and a woman in his group began discussing the sorority members. “She said, ‘All those girls are wearing these nice sleek pants, but I think in our day we were in better shape,’ ”

Berry said. “I said, ‘No, we weren’t. You can tell by the way they are walking. You can see all the muscles there.’” “VNB” was a comment “on their obvious athletic build,” Berry said.

We placed a call to the Berry household to further elucidate his views on the athleticism of the women in question, but had yet to get a call back by press time.

The Mizzou College Democrats have now issued a statement with two demands: One, that the Pachyderm Club remove Berry from office — and two, that the entire club be banned from future homecoming activities.

“For Mizzou students, alumni and Columbia families, there is hardly a better time of year than a Mizzou Homecoming Weekend. Unfortunately, Boone County Republican Club Chairman Frederick Berry chose to use social media to objectify women walking in the Mizzou Homecoming parade and sharing their school spirit," the Dems huffed.

Others joined in on Monday:

As a fellow @MIZZOUDG, I'm disgusted by @berryfs tweet. Objectifying @Mizzou women has no place in city leadership. http://t.co/AcdF9ywBRj

Incidentally, soon after he marched in the parade, Berry headed over to an anti-abortion rally. No word on whether he again found himself in deep discussion over the female physique.