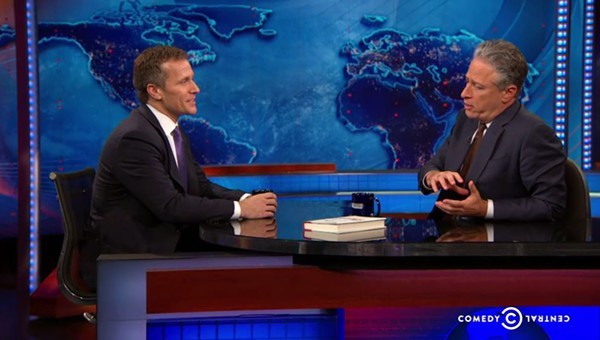 There was some interesting news out of the U.K. last week. According to reports, a London doctor performed the first successful operation using embryonic stem cells to treat blindness caused by age-related macular degeneration. The unnamed patient, a 60-year-old woman, seems to be doing well. Scientists are pretty damn excited.

Embryonic stem cells — which are taken from embryos used for in vitro fertilization and later donated to research — may hold the key to treating things like heart disease, spinal injuries or even diabetes. While local pro-life organizations argue that destroying a potentially viable embryo to withdraw stem cells is tantamount to abortion, the research is protected by a 2006 constitutional amendment. But the upcoming election for governor has thrust the issue back into controversy.

But when contacted directly, Greitens was far from silent. Asked to clarify his position, Greitens told Riverfront Times that he is "opposed to embryonic stem cell research." He added that while he identifies as pro-life, he supports scientific research to "cure diseases that are harming too many of our family members, friends and neighbors."

We should note that before we contacted Greitens Friday, he provided a statement to the Kansas City Star that merely reiterated his stance as a pro-life candidate without actually mentioning his opposition to embryonic stem cell research. Soon after we emailed the Greitens campaign, he sent out an amended statement that added the line, "I am opposed to embryonic stem cell research."

(The Missouri Democratic Party appears to have missed the update, since the party responded Friday by doubling-down on its earlier taunt, declaring that Greitens "provided no new clues" about his position.)

Correction/Update: After this story was published, Missouri Democratic Party spokesman David Turner let us know that we got the timing of the two press releases wrong. According to Turner, the second press release, "Update: Eric Greitens Sides With…",  was posted shortly after Greitens released his strangely ambiguous statement to the Kansas City Star. It wasn't until several hours had passed that Greitens finally released an amended statement spelling out his opposition to embryonic stem cell research.

However, the Missouri Democratic Party failed to update the information on its website to reflect Greitens' actual position on the issue. As of this writing, the second press release retains its (now incorrect) accusation that Greitens has "provided no new clues" to his stance on embryonic stem cell research.

Turner, who authored both press releases, does not plan on correcting his work.

"At the time of the release, based on the information that was publicly available, it was accurate," Tuner wrote in an email. He added that is "not incumbent" on the Missouri Democratic Party to accurately update voters on Greitens' position.

End of update. Our original coverage continues below:

The Dems might have netted some laughs by taking aim at Greitens, but there's little mirth to be found amid the state's deep divisions over abortion and funding for Planned Parenthood. With the exception of Bob Dixon (who as a lawmaker voted against the 2006 constitutional protection for embryonic stem cell research), the entire slate of GOP candidates for governor is now on the record declaring opposition to research using embryonic stem cells. (On the other side of the aisle, the Democratic front-runner for Governor, Attorney General Chris Koster, actually left the Republican Party in 2007 because of his support for embryonic stem cell research.)

What does this all add up to? An ideological showdown between Koster and one of the GOP candidates on the merits of embryonic stem cell research. The fight could be nasty, too, considering it draws on old party grudges and the renewed, GOP-led crusade to hobble Planned Parenthood in Missouri.

So, maybe lay off the clumsy trolling, Missouri Democratic Party? Or at least, if you've got to troll, just make sure it means something.