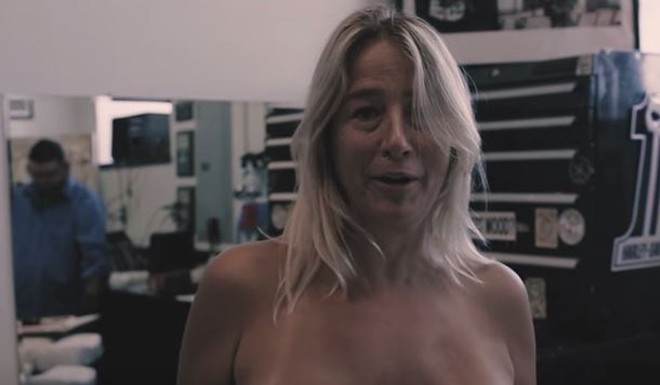 Five years ago, a small-town tattoo shop owner named Eric Catalano had an idea. He began offering customers free pink ribbon tattoos to commemorate Breast Cancer Awareness Month. He and his staff ultimately inked more than 400 people, some who were cancer survivors themselves.

Then breast cancer survivors began contacting Catalano on their own, asking him if he could tattoo areolas on the skin where their nipples used to be. He did that for a couple years, he says, before realizing he could be doing more.

"I'd been a body piercer for ten years, done hundreds of implants, usually a diamond or a star or whatever cosmetic things girls like," he says. "But I thought to myself, 'What if I just made a dermal implant into a nipple, and put the dermal implant into their breast?"

That's exactly what Catalano did. Three weeks ago, he says, he successfully implanted a prosthetic nipple onto the breast of a woman who had lost her own after undergoing a mastectomy. The woman appears in a Indiegogo campaign video posted this week. (Note: the video isn't graphic, but it does show some nudity.)


"I feel complete today," the woman says after Catalano finishes the procedure. "Being a cancer survivor and having a mastectomy is very challenging and difficult thing. I feel more womanly again."

Fashioning prosthetic nipples for women who lost their breasts to surgery is hardly a new industry. But the current options have their downsides: Some companies offer custom-made adhesive nipples, but they can run into the hundreds of dollars and have to be replaced every few months. There's also the surgical option, which involves a surgeon taking a skin graft from another part of the body to form the nipple.

A dermal implant , on the other hand, is a small piece of metal that goes underneath the top layer of skin. Part of the metal features a small post that rises above the surface of the skin, and other objects can be screwed into this post. Catalano says he worked with an engineer for months before they perfected the shape and feel of the silicon nipple.

Catalano, who runs tattoo shops in St. Louis and Hecker, Illinois, says he hopes to use crowdfunding campaign to provide his patented prosthetic nipples to women for free. He estimates that the total cost of the procedure — which also includes tattooing an areola around the nipple — runs in the hundreds of dollars.

"I don't want any actual sufferer of breast cancer to have to pay to put nipples on," he says. "I feel like it's not like their fault that they're gone, and I hope that through public funding I can be paid for my services and can turn around and do this for free."