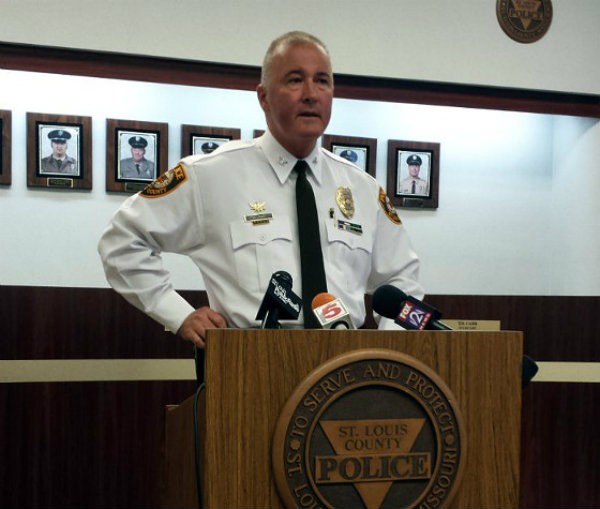 The St. Louis County Police Department stops and searches a troubling number of minority drivers compared to whites, according to the latest federal review of local law enforcement spawned by the Ferguson protests.

The U.S. Department of Justice took a top-to-bottom look at the county cops at the request of County Police Chief Jon Belmar, and released its findings today. The 855-officer force is “in a pretty solid place” overall, federal Community Oriented Policing Services Director Ronald Davis told reporters, but he warned the high volume of minority stops needed more investigation.

“We definitely found significant racial disparities,” Davis said in a conference call. “They should be a concern for the department.”

A five-year review of traffic stops found black drivers accounted for 30 percent of the stops, even though they comprise only 22 percent of the driving population. Nearly 16 percent of black motorists who were pulled over were searched compared to about 10 percent of white drivers. The numbers don’t automatically prove racial profiling, Davis cautioned, but it deserves a closer look.

Reviewers also chided the county for weaknesses in recruiting a diverse police force and failing to connect with minority communities, a problem highlighted in clashes between police and protesters following the death of Michael Brown, a black teen shot to death by white Ferguson police Officer Darren Wilson in August 2014.

County police took to Twitter on Friday to highlight the number of positives noted in the 182-page report, including a use-of-force rate that falls below the national average.

(1/2) DOJ calls the men and women of the #stlcountypd dedicated, doing a lot of positive things. Points to our Neighborhood Police Units

“As with any critical analysis, we will evaluate the recommendations, and move forward in ways that will ensure our commitment to serve and protect the citizens of St. Louis County, while continuing to set an example of leadership for other agencies to follow,” Belmar said in a statement.

The report, which is now posted online, includes 50 findings and 109 recommendations culled from more than 200 interviews and reviews of policies, incident reports and crime statistics. The recommendations are all advisory, and the county isn’t legally obligated to follow any of them because the review was at the request of Belmar and voluntary.

It will be up to “the court of public opinion” to make sure police follow through, Davis said, after praising Belmar for inviting the federal scrutiny.

“It takes a certain level of courage and a high level of commitment to expose your agency to such a comprehensive review, especially knowing that any and all shortcomings identified will be made public,” Davis said. “But it is this type of review that ensures we learn from both our successes and setbacks as we continually improve our operations.”

We welcome tips and feedback. Email the writer at Doyle.Murphy@riverfronttimes.com