Success! My Visit to IKEA Did Not Destroy My Relationship 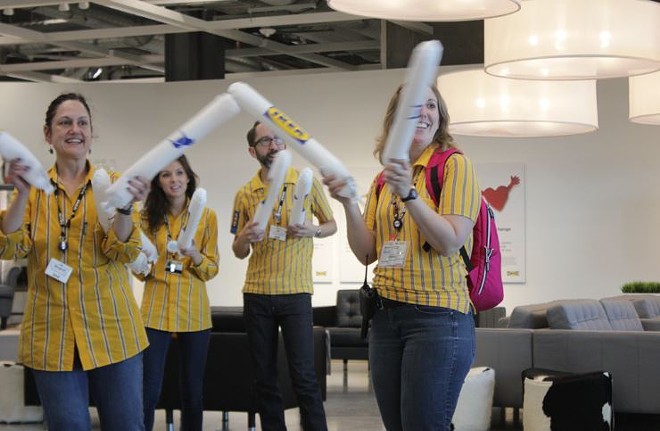 Eleven days before its grand opening, my girlfriend and I drove through the deserted IKEA parking lot. She pointed to the store's upper level as we rolled past the entrance. There, she said, tracing her finger across the face of the blue monolith: That’s where the showrooms are; there’s the cafe where they serve the meatballs; that’s the loading dock for furniture pick-ups.

“You go up and you go through this loopy, labyrinth-y maze to get through the showroom,” she said. She sounded serious, like she was planning a bank heist. “There are a few shortcuts here and there, but we have to go through the whole thing.”

About my girlfriend: Her name is Christy. She is a full-blown IKEA lover/addict, something I discovered through her squeals of excitement every time we drove past the construction site on Vandeventer Avenue. For Christy, a trained interior designer and DIY buff, the Swedish furniture company might as well be the real-world embodiment of Santa’s workshop.

And so on Wednesday morning, Christy and I pile into her car and set off to see splendor of opening-day IKEA. This will be my first time setting foot in the iconic (and, according to 30 Rock, relationship-wrecking) megastore.

Entering the parking lot, we are greeted by the thumping chorus of “She’s a Bad Mama Jama.” Employees and security guards in orange vests dance to the beat, waving us into the ground-level parking garage. When we finally arrive at the entrance, Fredbird is dishing out out high-fives to customers. Several employees wield the phallic-shaped balloons known as “thundersticks,” which produce a booming din when smashed together.

Christy and I ascend an escalator and enter the world of IKEA. Gawking patrons shuffle through kitchens and living rooms, prodding lamps and trying out recliners. “Urban living is a growing movement,” a sign tells us. “Ingenuity and compromise is a must in such tight quarters but more and more people are willing to sacrifice space for location.”

The showrooms display models of these aforementioned tight quarters, one of which is measured at just 376 square feet. Each feels like it’s been laid out in perfect, functional harmony. Closet doors invariably slide open to reveal racks of extra storage. Christy bounces manically from feature to feature, pointing out the well-placed hanging hooks and shelving structures. She melts over an apron sink.

“This is showing you how to live,” Christy says. She twirls through some Swedish designer’s vision of a crafting studio. “This room is telling you, ‘This is a multi-use space, this is how you organize whatever it is you need to organize.’”

Christy treats IKEA’s showrooms like design pornography — visual demonstrations of how space, objects, lighting and color can form an intimate feeling of, well, home. The small, seemingly personal touches of fakery are top notch: The spaces are furnished with ink-marked recipe books left on kitchen counters and diaries on end-tables. Figurines and picture frames adorn living room mantles. Comic books are stacked on a desk in a child’s bedroom.

“The risk of these spaces,” Christy warns, “is that it gives you a much more open feel than you think it does. Because it’s in a warehouse, you walk into this space and you think, ‘Oh, god it’s so gorgeous, it’s so open.’ But if there was a wall right there this would feel really tight.”

After two hours spent wandering through IKEA’s Stepford village, we finally hit the cafe, home to the store’s famous Swedish meatballs. The line, however, is dishearteningly long. We opt instead for Swedish chocolate and beverages (soda for her, coffee for me). We stop to watch an exhausted-looking saxophone player belt out tunes to a distracted audience.

The rest of the trip goes rather quickly. Christy moseys through the lower area of the store, where customers can grab many of the items showcased in the model rooms on the second floor.  Even further into the belly of the store lies its warehouse area, a massive space with soaring aisles and stacked merchandise that reminds me of Home Depot.

In the end, our trip hardly seemed like the so-called "relationship nightmare" experts warned about. And even putting aside the pop-psychology bullshit, it seems difficult to justify the amount of ink (including ours) spilled over IKEA. Did we really need to catalog every single rumor of the store's arrival, report on multiple construction updates and make IKEA boner puns? In retrospect, maybe not.

For me, my first IKEA trip amounted to an utterly normal consumerist experience, a slog through a branded jungle of appliances, dining room tables and knick knacks. On some level, I'm both baffled and jealous of Christy's fan-girl enthusiasm; she seemed at home among the excited crowds of furniture shoppers. Granted, I certainly didn't come away disliking IKEA. I think it's probably a great place to find a cheap couch or table. But, when it comes down to it, the couch itself doesn't matter to me — I'm far happier knowing Christy and I would haul that motherfucker up the stairs together.