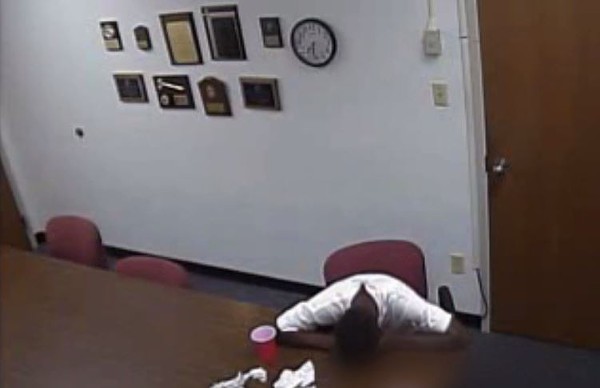 Despite the low quality of the interrogation video, it's impossible to miss Trevon Yates' nervousness. The seventeen-year-old fidgets in his chair, alternating between inspecting his fingernails, placing his hands on the table and nodding his head. He seems to be staring at his hands when the door opens.

The deputy's face has been blurred out in the video, but it's Kenneth McHughes, an investigator with the St. Clair County Sheriff’s Department.

Yates mumbles back: "What's up?"

"Not a whole lot," McHughes says. He chuckles and adds, "Just another day in paradise."

For Yates, the next two hours were much closer to hell. According to a federal lawsuit, McHugues and other investigators employed interrogation tactics that crossed legal lines. Among other things, they told the East St. Louis teen — who was later found to lack the mental capacity to understand or waive his Miranda rights — that confessing to an armed robbery would grant him leniency and allow him to avoid prison.

Instead, Yates spent nine months in the St. Clair County Jail before the armed robbery charges were dismissed, unable to pay the $500,000 bond. He was also shamed in the press, including this website, as the perpetrator behind a Belleville, Illinois, "Craigslist assault."

"You can watch the confession unfold," says Locke Bowman, executive director of the Chicago-based Roderick and Solange MacArthur Juvenile Justice Center and one of Yates' attorneys. "Trevon has vulnerabilities that make him very susceptible to suggestion and to having his will overwhelmed. His IQ measures around 60."

Indeed, footage of the interrogation includes scenes of Yates crying out for his mother and God; at one point, the teen said he would kill himself. The video also appears to show the investigators feeding Yates details of his confession, including how many people were sitting in a car he supposedly robbed on August 12, 2013.

But Yates didn't even match the description of the suspect. And in June 2014, a psychologist determined that Yates' mental deficiencies “impaired his ability to knowingly waive his constitutional rights," St. Clair County State’s Attorney Brendan Kelly said in an interview with the St. Louis Post-Dispatch. In a later interview, Thomas Ysursa, a lawyer representing St. Clair County, told the Post-Dispatch that the county admits no wrongdoing and still backs the investigators' conduct during Yates' interrogation. (Ysursa did not respond to our request for comment.)

Bowman tells Riverfront Times that Yates' ordeal is representative of how false confessions are obtained throughout the country. And while investigators are legally allowed to lie in  during these interrogations — for example, telling a suspect that police posses incriminating evidence that doesn't actually exist — these strategies can be easily abused. The result is desperate people confessing to crimes they did not do.

According to the National Registry of Exonerations,1,669 people have been cleared of criminal charges since 1989. Nearly thirteen percent of those exonerations involved false confessions.

"This case presents a teachable moment," Bowman says. "The techniques that officers can use, even those they can use legally,  are extremely powerful and they are extremely effective. So if you're going to employ those techniques against a person, you should have good reason to believe person committed the crime."