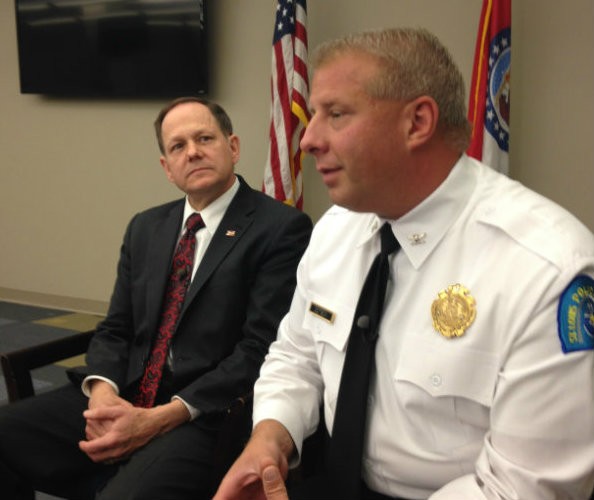 St. Louis cops have called in help from the FBI as they search for the gunman behind a cold-blooded stickup that followed Friday night's Cardinals baseball game.

Police Chief Sam Dotson said city detectives and federal agents are looking for a “brazen” shooter who robbed Christopher Sanna and his girlfriend at gunpoint, and then blasted the 43-year-old Army veteran in the back as the couple fled.

“When you have a brazen robbery with tens of thousands of people downtown just as a Cardinals game is breaking up, a couple of blocks from the stadium, an individual pulls up, gets out of his car, announces a robbery, and after he's taken the possessions, still shoots the victim, that's the type of person we need to make sure we are going after and putting in jail,” Dotson said in an interview.

Detectives had little to go on in the early stages of the investigation, he said. Police canvassed the neighborhood twice, but haven't found any surveillance cameras or footage of the attack. Victims were able to provide a vague description of the shooter: a black man, between 5 feet 2 and 5 feet 4 inches tall with long dreadlocks. Investigators are reviewing recent cases in search of a pattern that might turn up clues. 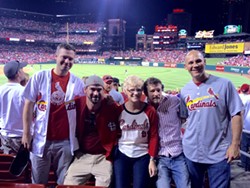 “There's nothing that weighs on me more, or keeps me up at night more often than this — violent crime, innocent victims being assaulted or shot int he city of St. Louis,” Slay told reporters. “I'm beyond frustrated. I'm angry about it.”

Sanna and his girlfriend left Friday's game against the Milwaukee Brewers in the ninth inning and were walking to their car about 10:30 p.m. when a man pulled up in a car, hopped out and demanded they hand over their valuables, authorities said. The couple quickly complied, and then ran when the robber pulled a handgun, police said.

The crook opened fire, striking Sanna in the back. The House Springs man survived, but is likely paralyzed, relatives said.

“The surgeons have confirmed that his spinal injury cannot be repaired,” his mother, Candis Sanna, wrote online. “His T11 & 12 was completely shattered by the bullet.” The family has started an online fundraiser on GoFundMe and had raised nearly $30,000 by Monday afternoon.

"St. Louis isn't St. Louis anymore," Jessica Sanna wrote on Facebook. "It's a city that you just don't want to even walk around because of things like this."

UPDATE: See our September 29 update — Sanna's mother talks about how she heard the awful news, and her son's fears for his future.

We welcome tips and feedback. Email the writer at Doyle.Murphy@riverfronttimes.com