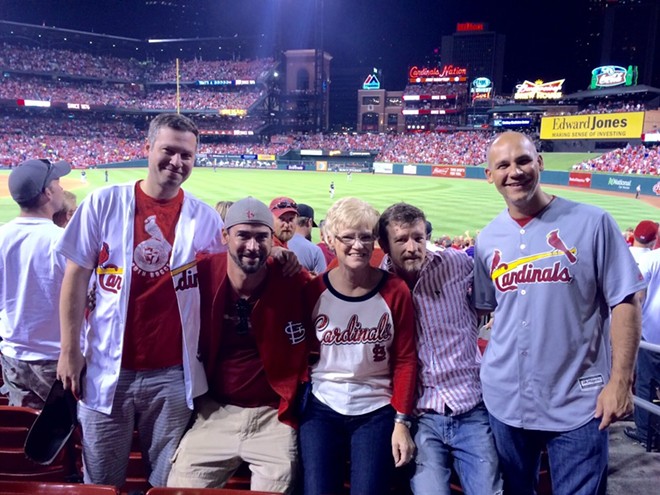 A Florissant woman suffered every mother's nightmare in downtown St. Louis Friday night when her son was shot walking to his car after a Cardinals game at Busch Stadium.

Chris Sanna had gone to the game along with his three brothers to celebrate his mother's 60th birthday — and see the Cards beat the Brewers. But he has been left paralyzed after being mugged just a few hundred feet from the stadium, according to a GoFundMe page set up by his mother, Candis Sanna.

"The surgeons have confirmed that his spinal injury cannot be repaired," she wrote Sunday. "His T11 & 12 was completely shattered by the bullet."

Chris Sanna was walking just outside the Old Cathedral at Walnut and Memorial Drive around 10:30 p.m. when he and his girlfriend were approached by a pair of men in a black sedan, KMOV reports. A man got out of the car and demanded his girlfriend's purse. She turned it over, but then the man pulled out a gun anyway. When Sanna and his girlfriend took off running, the man shot Sanna in the back.

The area is just a few blocks from Busch Stadium and the Gateway Arch. Post-game, it's generally filled with foot traffic as sell-out crowds make their way to their cars.

Police have yet to make an arrest.

Candis Sanna wrote this about the incident:

As a mother of four sons there are few moments I can look back to and fondly remember having each of my boys, each unique and individual in his own way, yet all completely of me, together in a single place at once. My oldest son, Chris, joined me and my other three sons who had made trips from their homes throughout the country along with their families to celebrate my 60th birthday to watch the St. Louis Cardinals. This rare, and precious night turned into every mother's worst nightmare. Chris was shot while walking back to his car from Busch Stadium in downtown St. Louis.

Chris served in the Army for 6 years, I watched him grow, become a man, a soldier- and now he will likely never walk again. Chris and my family need your support to help with medical bills and preparation for a challenging future.

We'll update this story when we learn more information. In the mean time, make sure to check out Candis Sanna's GoFundMe page to contribute to Chris Sanna's recovery and get updates from the family.

UPDATE: Mayor Francis Slay and St. Louis Metropolitan Police Chief Sam Dotson say the FBI has joined the manhunt for Sanna's shooter. See our Sept. 28 update for the latest in this case.

Also, see our Sept. 29 update. Christopher Sanna has now left the ER, and his mother tells us about how she heard the awful news — and what her son now worries about in light of his paralysis.


We welcome tips and feedback. Contact the writer via email at sarah.fenske@riverfronttimes.com