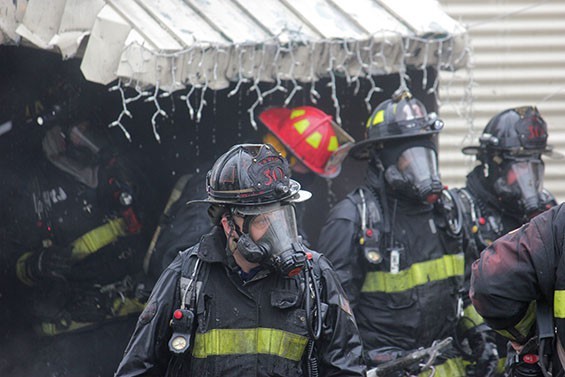 After years of saber-rattling and declarations of discontent, a group of black St. Louis firefighters is now suing the city over its policies governing promotions. According to the lawsuit, those policies are designed to block black firefighters from climbing the career ladder — and, even worse, the suit claims that the city's Department of Personnel is working to dismantle successful diversity reforms set in place in the late 1970s.

Initially filed in a state Circuit Court in August, the suit was transferred to federal court last week. The 140 plaintiffs, all black firefighters, are described as members of the Firefighters Institute for Racial Equality, or F..I.R.E., an organization which has fought for decades against systemic racism in the Fire Department.

"We're not asking for some kind of rigid proportionality, we're not saying every time a white firefighter is promoted a black one should be promoted, or even that the level of officers should reflect he diversity of the city," says F.I.R.E. attorney Joe Jacobson. But, he adds, "Those things would all be nice. We think those things would be achievable if the tests were done in a fair way."

Jacobson is referring to the tests given to firefighters seeking promotion to battalion chief or captain. The new lawsuit takes particular issue with the tests administered in 2013.

Prior to the test, the lawsuit states, F.I.R.E. contacted the City Comptroller to request that test assessors reflect the same racial and gender diversity as the firefighters taking the test.  Among other safeguards, F.I.R.E. also asked that the written test be graded immediately and that the performance portion of the test be recorded on audio or video.

But none of the recommendations were put into place, despite the fact that the city's Board of Estimate and Appointment passed a resolution asking Richard Frank, the city's Director of Personnel, to implement those very safeguards. Frank, we should point out, is granted a special measure of independence by law; he's not bound by resolutions issued by the E&A Board, the mayor's office or the Board of Aldermen.

When the 2013 promotion tests rolled around, F.I.R.E. claims that the Department of Personnel structured the exams "to maximize the adverse impact" on black firefighters. The lawsuit notes that the written tests were graded off-site and were subjected to "undisclosed adjustments." The suit goes on to claim that black candidates for promotion had their test scores altered.

"Following the exam, one of our clients was told by the assessor that he had the highest score, but when the scores came back months later, he didn't have the highest score, he was down in the middle of the pack," says Jacobson. He argues that this kind of discrepancy reveals the rotten intent behind the city's testing procedures.

The lawsuit comes after years of advocacy on the part of F.I.R.E.. Along with the U.S. Department of Justice, the group successfully sued the city in 1974 to place a consent decree on the Department of Personnel. The consent decree mandated "50/50 hiring," stipulating that every white firefighter given a job would be matched by the employment of a black firefighter. This consent decree was enforced until 2002. A court order eliminated 50/50 hiring in 2003.

In a 2010 report examining the hiring, retention and upward mobility of black St. Louis city firefighters, F.I.R.E. contrasted the diverse makeup of the Fire Department following the 1970s reforms with the present day's increasingly white-dominated department. The report concluded: "It is F.I.R.E.’s belief that the Personnel Department has made a conscious decision to go back to tests that benefit white candidates over black in an effort to decrease the number of blacks officers on the Fire Department."